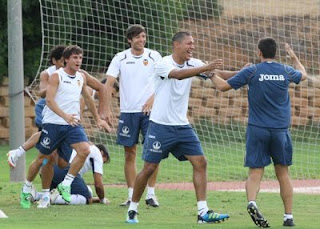 Valencia CF played its first match of the season today against themselves. Yeah as you already might have known, the kick off to the league has been postponed to next week, due to the players strike. All interested sides will try to reach an agreement over the issue and will talk today and then in Monday again.

But anyways Unai Emery divided the team into 2 groups of 12 players and they played a 40 minutes match in order to recreate real play as much as possible.

The black and white team won the match 4-3. It would have been amazing if there was a video of the match to see how the players performed, but that's just wishful thinking.
Posted by SlickR at 3:23 PM
Email ThisBlogThis!Share to TwitterShare to FacebookShare to Pinterest
Labels: news
Newer Post Older Post Home