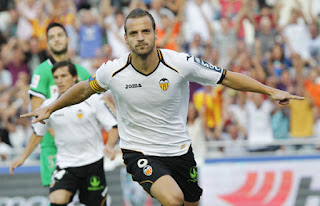 What an amazing first match, full of happiness, rage and then happiness again. It was a match that no one probably predicted would turn out the way it did.

Valencia CF started the match brilliantly and scored in the very first minute of the match, courtesy of Roberto Soldado. After the positive start to the match it would all soon turn into doom and gloom with Racing equalizing just 5 minutes later courtesy of Soldado again, who now scored an own goal.

Then again just several minutes later, Racing would score again to make it 2-1 and their goal would come from Acosta.

Valencia CF was quite bad after that with not so many chances and failing to penetrate the Racing defense who really went out all on the defense.

At half time Unai Emery would remove Ricardo Costa and replace him with Tino Costa in a bid to control the match better and add some urgency to the midfield. Mehmet Topal then placed as a center back and Tino and Banega were in the defensive midfield positions.
He would also remove Bernat who was actually decent in what I managed to saw from the first half, but anyways he replaced him with Canales.

But this would back fire on us as Racing counter attack would caught our defense with their pants down and score once again in the 56th minute to make it 3-1 for Racing, Luckily though in a bid to save our defense's face Adil Rami would score a goal back for Valencia CF just a minute later and this would put as back in the game.

In a bid to save his face Emery brought on Jonas for Pablo Piatti, who up to then played really well, although he didn't really change anything.

The Jonas move would pay off huge dividends as Jonas would manage an incredible assist to Soldado who would score and make it 3-3. That was really amazing that Valencia CF equalized after such a long battle, but as we had the initiative at that point in time Valencia CF would score another goal, once again by Soldado, this time setup by Jordi Alba from a cross from the left side.

After watching a match of frustration for so long, it felt so good that we didn't even draw, but win.

Player Ratings:
Guita 4 - He can't organise his defence and doesn't come off his line anymore
Bruno 5 - Not that bad but badly out of position at times as were all the defence
Rami 5.5 - A bid of presence yet again at times badly out of position
R Costa 4 - I am not sure if the substitution was tactical or an injury but he was all over the place at times
Alba 6.5 - 2 great stops,though one ended up in the net quite soon anyway. Also a great cross leading to the winner
Pablo 5 - Nice set piece crosses, passing gradually got worse as game on though
Topal 5 - Heading for a higher mark before moved to central defence
Ever 5.5 - Some got stuff but a lot of silly long shots that never got close and gave the ball back to Racing
Bernat 4 - not that visible, not his fault, he is an impact sub at this age- why did he start ?
Piatti 6 - promising debut, caused problems but final product not always that good
Soldado 8 - missed 4 good chances and a difficult one but scored 3 and sadly one 'og' (very unlucky) but this was a great start to his season, looked very dangerous and will be one of La Ligas top scorers this year. Soldado has the habit of being where he should be and you can't teach that !
Subs:
T Costa 6 - nothing special but very lively
Jonas 7.5 - should have started, class performance
Canales 7 - great debut some lovely passing

http://loscheuk.loscheuk.com/#post7
Thanks Gavin for the rankings. Unfortunately I won't be making them official on the ratings page, because I just don't agree with some of them.
Posted by SlickR at 10:32 PM
Email ThisBlogThis!Share to TwitterShare to FacebookShare to Pinterest
Labels: match report
Newer Post Older Post Home