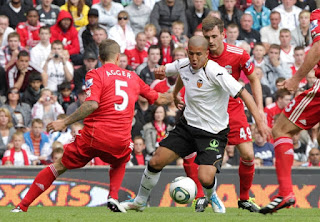 Valencia CF lost for the second time in preseason and it was a ugly loss, since Liverpool were not showing any positive results before this match and Valencia CF were in great shape. What this match shows is that the players need to gel and its now time for Unai Emery to stop changing the whole team in 45 minutes and choose the best: Guaita; Miguel, Rami, ?, Alba; Maduro, Banega; Feghuoli, Parejo, Piatti; Aduriz and field them for 70 minutes the next 2 matches. I know Aduriz and Guaita are injured, but from what we've seen so far and from what we know from last season they are the best options now in their respective positions.

What we saw today from Ever Banega was amazing and if he can stay in shape, have his mind in the right place and work hard he can be our best player and really help Valencia CF finish high, high, high.

Pablo is also lacking in the preseason and Feghuoli has been at least 2x better than Pablo so far. Surely Emery must start Feghuoli before Pablo after being better in all matches. Its also obvious that Juan Mata is really out of form and that Piatti plays best at left or right and not as an attacking midfield. I'd reserve the AM position for Parejo and Canales.

This match showed that VCF really has a lot more work to do and with still almost 1 month left before the start of the competition we need to improve and the team needs to gel more, especially the new signings although each match is better and better.

As far as the play by play of the match goes Carroll scored an absolute crap goal with Albelda gifting him the ball and Carroll actually managed to hit the woodwork the first try and only managed to score in the second try, talk about someone sucking with his feet.

The second goal for Liverpool came from Dirk Kuyt after maybe they were played onside by ?Dealbert? maybe. I need to watch a replay to see it again, to me it seemed like a total mess in the penalty area and someone should have headed the ball out of the area  even before someone from Liverpool has a chance to shoot. Diego Alves should also have done a better job, the ball was moving with 1kph towards the net, anyone could have catch up to it and save it.

Diego 5 - Poor performance, even though he did nice against Caroll first try he should have reacted faster in the rebound. Basically assisted Liverpool on 3 occasions with his bad passing or shooting.
Bruno 5 - Beaten twice by Downing early on, failed to offer much support in attack and was quite reserved with defending.
Rami 6 - Good and assured performance by Rami, managed to stop several Liverpool attacks before they progressed.
Topal 6 - Had two good interventions and surprisingly good in defense.
Alba 6 - Did well in defense, certainly not beaten by anyone, had 3 good runs forward and provided few crosses.
Pablo 5 - Apart from two decent runs, was largely ineffective and failed to provide any crosses, any passes or anything positive in any way.
Albelda 1 - Absolutely terrible performance from the captain. Passed the ball to Carroll for the first goal, made several similar mistakes, a stupid foul for a yellow card. Right now Maduro is certainly ahead.
Parejo 5 - Not the best performance from Parejo, had a lot of missed passes, although he had absolutely no help in midfield. Will want to improve upon this performance.
Mata 4.5 - Absolutely invisible and when he got the ball he usually stalled the attacks or lost the ball. Right now 35 million euros seem way too good to pass out if some1 is willing to pay.
Piatti 5.5 - The most consistent player in preseason failed to lift up Valencia this time, and as the rest he failed to provide much attacking threat. Was a little bit better than Pablo though with his direct running.
Jonas 5 - Few runs here and there, but failed to get in good positions or create some attack going.
Subs:
Mathieu 6 - This is the Mathieu we want to see. Great in defense, making timely sliding tackles and winning the ball or at least postponing an attack and making forward runs and really troubling Liverpool.
Miguel 6 - Great improvement over Bruno and his attack mindedness really helps Valencia in attack, as long as there is someone to cover for his absence.
Maduro 5.5 - Guaranteed his spot before Albelda tonight. Really good passing, made himself available to receive passes and helped out in defense when needed.
Tino Costa 5.5 - Works really hard and runs constantly, but unfortunately can not control the midfield. Does good though when more forward.
Feghuoli 6 - Makes Pablo look like a school boy or something. Absolutely deserves to start over Pablo. Had great link-up with Miguel and Banega, got into dangerous positions, all he was missing today was lethality to finish off the actions.
Soldado 5 - Pretty much the same as Jonas. Had one good chance, but failed to score. Needs to improve!
Bernat 5.5 - Small improvement over Mata, was more involved and had two good runs on the left, went missing a bit towards the late game.
Banega 6 - Amazing performance from Banega. When he is in shape and his head in the right place he is an amazing player. Single-handedly overcome Liverpool midfield and created few scoring chances with his direct passing.
Costa 5 - Calm and collected, did not have much to do in 15 minutes.
Dealbert 5 3 - He had a good block as soon as he came in, some good passing range shown, may have been at fault for putting onside Liverpool attack for the second goal. I need to watch a HQ replay to judge properly though. May rewrite this rating after seeing a replay. EDIT: Well I just watches a good quality replay and yes Dealbert did play the whole Liverpool attack onside. Costa isn't too innocent as well, they both moved and that was even before the cross flew, Costa stopped though and Dealbert kept running. Still its 100% Dealbert fault, he should have known better.
Posted by SlickR at 8:54 PM
Email ThisBlogThis!Share to TwitterShare to FacebookShare to Pinterest
Labels: match report
Newer Post Older Post Home