Valencia CF just won its 4th match of the preseason in what was the best play I've seen from Valencia CF so far this preseason. This was by far the most complete and assured performance and its obvious the players and the coach have been working very hard to improve. 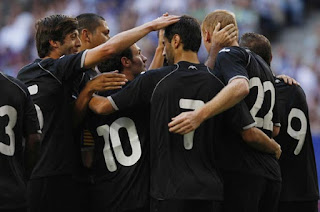 As soon as the match started Valencia CF gained control and used it to good effect with an early goal by Juan Mata by an assist by Feghuoli. It was a rather lucky goal as basically the ball hit Mata's leg and ended up in the goal.

Valencia would have several more chances as Soldado, Jonas and even Miguel would have a try at a goal. Hamburg had few chances of themselves with the biggest one coming after a cross when Costa slipped on the grass and allowed the Hamburg striker to head the ball towards goal, but Diego Alves was alert and caught the ball. Miguel would also have an early slip-up which would cause a counter attack by Hamburg, but once again the defense and goalkeeper stood strong.

Parejo and Maduro surprisingly had great understanding and did quite good together, with Maduro helping out in defense numerous times and having very accurate passes, while Parejo was really good as a playmaker and managed to carry the ball forward with ease. 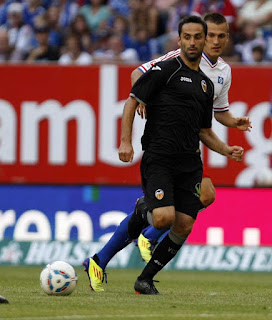 Juan Mata would have a good chance later on, but he failed to pass the ball accurately and destroyed the chance, Feghuoli was playing on Jonas and a lot of the players, but ultimately the first half ended with 1-0 for Valencia.

In the second half Emery made one change as he brought Piatti for Soldado and Jonas and Piatti were changing positions. The second goal would come early after a counter attack from Valencia lead by Piatti who's pass accurately found Bernat who scored a goal from a difficult position.

Minutes later Alba would steal the ball from a defender in Hamburgs last 3rd and pass it onto Piatti, but this one only managed to shoot above the goal. Soon after Emery made a ton of changes and the dynamic of the play slowed a bit and Hamburg had some good opportunities to score, but mostly Topal and Albelda were able to handle it.

Hamburg would score a goal from a corner kick when Pardo was out jumped, but Valencia would manage to close out the match.

Player Ratings:
Diego 7 - Made some great saves, really confident for the first time and was really good today.
Miguel 7 - Apart from an early mistake when he lost the ball, improved drastically and was a rock in defense and a great asset in offense.
Costa 4.5 - Made two blunders by sliding on the grass twice. Could have cost us the game, but luckily Hamburg failed to convert those chances.
Dealbert 7 - Great performance by Dealbert, had a small mistake early on, but absolute dominant performance afterwards and had some great passes to play on the midfield and spur on possession and play.
Mathieu 5.5 - Did well enough in defense and had a few forays forward, but needs to improve.
Feghuoli 7.5 - Astounding performance by Feghuoli who's passing was spot on, provided the assist for the first goal, did well to help out Miguel in defense and was always a threat to Hamburg.
Maduro 6 - Really assured performance from the Dutch with great defensive coverage and about 90+% accurate passing.
Parejo 6.5 - Did really good as a playmaker, always available for a pass and managed to spread the ball well to the rest of the players. Great game by Parejo.
Mata 5.5 - He is not in full fitness or form and today he made it very obvious. Was presented with some good chances, but he managed to ruin them.
Jonas 6.5 - Very intelligent play by Jonas, made himself available and did really well to create chance and come into scoring positions.
Soldado 5.5 - Likely to be repeat of last season when he was really bad for half a season and then just exploded. He need to improve and improve really fast and really much.
Subs:
Piatti 6.5 - Is becoming a very consistent player, assisted a goal and is currently the leading goalscorer in preseason along with Bernat. Had two more chances, but failed to convert them to goals.
Alba 6 - Did good defensively and showed his attacking threat by stealing a ball from Hamburg defense and passing it to Piatti who unluckily shot above the goal.
Topal 6 - Had an instant reaction after coming in and saved the goal. Had several good tackles through the 45 minutes.
Bruno 5.5 - Did decently well in defense, lost a few balls needlesly and wasn't as impressive as in previous matches.
Pablo 5.5 - Had few good runs, with one specifically dangerous but the offside was called. Needs to work much harder and really improve or he is going to be benched by Feghuoli if he isn't already.
Tino Costa 5 - Had a few touches with the ball, made few passes, lost the ball carelessly two times, its obvious he is coming from injury and needs more work.
Albelda 5.5 - Did well to help out defensively and was pretty good with the passing, but nothing noteworthy.
Bernat 6 - Scored a goal from a pretty tough position and was very active through. He needs to improve his passing and learn to link-up better with other players.
Portu N/A - Not enough time
Pardo 2 - Had enough time to screw up and allow Valencia to concede a goal. Was way out jumped by Behrens for the goal. Isn't ready for the first league and tough matches that is clear now, if it wasn't already. We need to get a central defender and get a good one.
Posted by SlickR at 9:53 PM
Email ThisBlogThis!Share to TwitterShare to FacebookShare to Pinterest
Labels: match report
Newer Post Older Post Home