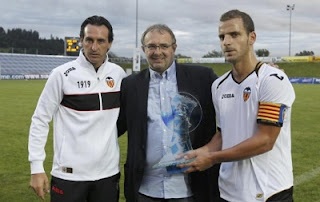 Unai Emery continued his good preseason matches with Valencia CF with a 1-0 win against Leicester City FC and previously a 2-0 win against PSV Eindhoven.

Coach Unai Emery had this to say after the match: "This victory is important, but we can improve a lot more. You've seen during the match in some moments we played really good and in others quite bad."

On the two half's he said: "The first half we were better, in some moments when we were attacking we played 4-4-2 formation which I really liked. We must continue working on it, because we are likely to use of of the two formations against Osasuna."

Emery analyzed the performance on individual players and said: "Jonas and Aduriz played great, this was the first time they played together and up till now they only worked on two trainings together. Today they have shown their knowledge and professionalism.
I also have to praise Pablo Piatti who works very hard, in him we got a great reinforcement. Then there is Daniel Parejo who immediately showed us that he is a big reinforcement for the club."

About the next match against SK Rapid Wien Unai Emery said: "The idea is for the first eleven to play a little bit more minutes and after that to have substitutions. Its very likely that Juan Mata will get his first preseason minutes playing time in the match against SK Rapid Wien."
Posted by SlickR at 11:04 PM
Email ThisBlogThis!Share to TwitterShare to FacebookShare to Pinterest
Labels: interviews, news
Newer Post Older Post Home