Valencia CF won its forth match of the preseason against Sporting Lisbon, after being trashed last week by Rapid Wien 4-1, so this was an unexpectedly high victory. I've watched Sporting's last match against Juventus and they absolutely destroyed Juventus in all parts of the field, so either Juventus suck or Valencia are very good.

Personally I don't think we played that well, I mean yes we scored 3 goals, but they were all kind of lucky goals which we wouldn't be able to score against a world class defense. Sporting's defense made many mistakes in this match and should be happy they didn't concede more goals. 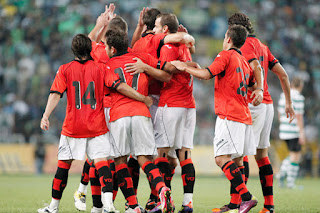 But anyways just 2 minutes after the match started Pablo had the first chance of the match when he shot and hit the woodwork. Then just few minutes later Bruno was carrying out the throw-in the Sporting defense all missed the ball, their goalkeeper was late off his line as well and Bernat was speedy and agile enough to go to the ball first and head the ball in the net.

Later on Sporting and Valencia CF will have one shot on goal saved by both goalkeepers. Second goal would come from Soldado after being played on by David Albelda who played Soldado deep with a cross and Soldado managed to get rid of his marker and score.

The third goal came in the 41st minute, 10 minutes after the first goal, this time from the left side. Alba got the ball from an out got lost of his marker and passed the ball to Piatti who made it 3-0.

The second half would be a lot more boring and Sporting would have its own chances to score, but our defense will hold. Emery then changed most of the team until the 75th minute and Valencia CF managed to close out the match 3-0.

Player Ratings:
Diego 5 - Had some good saves and that saves his score, but he was directly involved in endangering the goal twice with his bad passing and shooting.
Bruno 6 - Wasn't beaten once and kept his side safe from danger. Didn't venture forward too much though.
Rami 6 - Finally an overall good performance by Rami. Wasn't at fault for any goalscoring chances and really destroyed any potential chances by timed tackles and fouls. I would actually play him as a DM and see how he does, I feel he could be really good at that position.
Costa 6 - Great performance by Costa, got rid of any threats to the goal and didn't allow any shenanigans in front of goal. Had a good header in Sporting's penalty area.
Alba 6.5 - Good defensively and even better offensively, provided the assist to Piatti for the 3rd goal.
Pablo 5.5 - Had a shot very early in the game that ended up hitting the woodwork, but disappeared after that. He popped here and there, but failed to create any chances.
Topal 4.5 - Lost the ball too many times with needless dribbles and complications. Did great defensivelly, but had too many errors overall.
Albelda 6 - Helped out in defense constantly and was quite active in the passing as well, making a long deep cross that found Soldado for the second goal.
Bernat 6 - Scored the first goal after somehow coming to the ball first and heading it in the goal. Was somewhat dangerous on the left side afterwards as he made few runs.
Piatti 6 - Scored a goal and was very active in the middle and on the left, but his passing was quite bad today and wasn't linking up with the other 3 attacking players.
Soldado 6 - Was a constant menace, provided few great passes that lead to shots and scored a goal himself.
Subs:
Dealbert 6 - Did well tonight, not the most assured performance, but made several good tackles.
Mathieu 5.5 - Was decent in defense and offense. Is slowly but surely falling behind Alba, he needs to really up his performance.
Miguel 5.5 - Not as great defensively as Bruno and wasn't too active in attack also.
Feghuoli 5 - Few touches and passes, lost the ball quite a few times, so not a good performance.
Maduro 5.5 - Improvement over Topal as he was quite solid on the pass and made simple and accurate passes.
Parejo 5 - Lost the ball few too many times and failed to organize play.
Mata 4.5 - Had one shot at goal that went wide and above, but other than that invisible.
Jonas 5 - Exchanged few passes at the front, but was mostly all alone at front with no balls coming his way.
Pardo 5 - Decent in defense, a lot better than last match that is for sure.
Portu 5 - Slotted well in the midfield and provided more depth than Parejo, but largely ineffective as well.
Posted by SlickR at 10:55 AM
Email ThisBlogThis!Share to TwitterShare to FacebookShare to Pinterest
Labels: match report
Newer Post Older Post Home