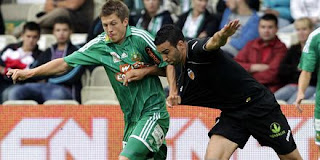 Well the third match didn't turn out as we'd all hoped and expected as Valencia CF was pretty much embarrassed by Rapid Wien and while they are already in their season and I've written that they will be in full form and fitness and for us to expect a tough game, I didn't expect Valencia CF loosing 4-1.


First goal Wien scored was mainly because of a Rami mistake, he marked the same player Costa marked and then Portu failed to mark the player Rami was supposed to cover in the first place. So this was a double fail, although I'm not blaming Portu so much as he isn't a right back in the first place.

Second goal for Wien was a weird one as one of their player tried to cross and ended up being a shot, fooling Diego Alves and ending up in our goal.

In the second half in was a completely different starting 10 with only Diego left on the pitch, but the result did not become any better.
Wien would go on to score 2 goals, before Pablo Hernandez scores a consolidation goal for Valencia CF.

Wien's third goal would come after a counter attack from the right wing and even though the goalscorer was clearly offside the goal would stand.

Forth goal came from a counter attack as well, so this means that someone was loosing the ball too much in the middle of the pitch and there wasn't enough cover for the defense. I'm looking particularity at Maduro and Topal here, but would need to review the match to see exactly who committed the mistakes. Anyways Dealbert set up a nice offside trap only for Pardo to come rushing back and playing the striker onside.

Player Ratings:
Diego 4 - Received a weird goal in the first half from a cross, in the second half he looked shaken, but made few saves to redeem himself although it was not a performance to remember anyways.
Portu 3 - We can clearly see today that he isn't a right back. Lost the ball way too often when pushing forward, missed the marking for the first goal, although he wasn't particularly the main falter.
Rami 3.5 - Had a great game before and after the goal, but really screwed up for the 1st goal marking the same man that Costa was marking.
Costa 5 - Had a good showing, didn't make any mistakes which is most important.
Alba 5.5 - Good defensively, not so effective going forward as in the previous friendlies though.
Feghuoli 5 - Had an average game, few too many times afraid to push forward though.
Albelda 5 - Decent game from the veteran, showed good composure and provided good defensive cover.
Parejo 5 - Has great technique and good vision, but was not very influential in the position he was in.
Piatti 5.5 - Had blistering pace as he showed again, less effective since the left wing was crowded too much by Mata and Alba.
Mata 5.5 - Good first match from Mata, showed a bit of leadership and had a constructive game with good movement and passing.
Aduriz 4.5 - Deprived of any balls he was left alone in the penalty area.
Subs:
Miguel 4 - Not particularly good in defense or in attack. Lost several challenges and left frustrated going forward.
Pardo 3 - Helped Wien attackers get onside at least once, I'm 99.9% sure the 3rd goal was offside, but he certainly played onside the Wien attacker for the 4th goal.
Dealbert 4 - Had a debatable action for the 3rd Wien goal, but that should have been an offside, set up a good offside trap for the 4th goal which unfortunately Pardo played onside. Not very convincing either way.
Mathieu 5 - Good defensive showing and was more offensive today, but he needs more consistency.
Pablo 6 - Saved himself until the end to score a wonderful goal after passing 4 players. Didn't do much otherwise.
Topal 5.5 - Did well to pass the ball around and good in his defensive duties.
Maduro 5 - Didn't do much of anything, several touches and passes but seems like he doesn't know what his role should be.
Bernat 4 - Few touches with the ball and that was it, invisible for the large majority of the match.
Jonas 4 - Missed passes, failed to catch passes and his movement was very limited.
Soldado 3 - Came in frustrated and even if the referee didn't show him red card for that challenge I feel like he would have done anything and everything to get dismissed. Way too frustrated.
Posted by SlickR at 9:22 PM
Email ThisBlogThis!Share to TwitterShare to FacebookShare to Pinterest
Labels: match report
Newer Post Older Post Home