Valencia CF first preseason match starts tomorrow - 19.July.2011 at 18:30pm in Austria and will be against Dutch 3rd place finisher from last season PSV Eindhoven.
Both clubs have started the training sessions at similar times, although PSV started their preseason matches earlier and have already played some matches and are likely more sharp. 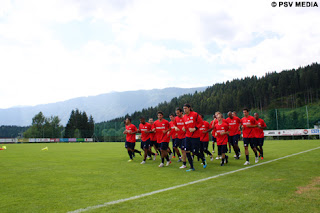 PSV Eindhoven is a club with rich history and while its usually overshadowed by the likes of Ajax its one of the best teams in the Dutch league and has produced a lot of great footballing names like Jaap Stam, Phillip Cocu, Ruud Van Nistelroy, Mark Van Bommel, Ajren Robben and so on... The team has got a very long and rich history, it was founded in 31 August 1913.

Last season PSV finished 3rd behind the likes of FC Twente and AFC Ajax, but this allows them to be in the Europa League play-offs. More recently PSV played a friendly against Turkish team Bursaspor (the team that Valencia CF destroyed last season in the champions league) and managed a 1-1 draw with them. Before that PSV had a narrow 2-1 win over FC Eindhoven. 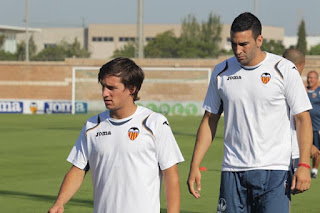 Valencia CF is a club with rich history as well, but I'm not going to talk about that here. Valencia CF has started the preseason very well. The first training session consisted of very light workouts and mini medical exam, it was basically a nice way to warm up for the real deal. After few training sessions twice in a day the squad was fully medically tested from cardiovascular testing to physical testing, it was all there.

Since then the team has had more double training sessions a day in order for the players to recover their fitness and form quickly. There has also been some fun training sessions like going out to the beach and kayaking.

The last few days the team has also been working real hard on the defense. Valencia CF coach Unai Emery has been implementing new defending techniques and tactics in the hopes that this season the defense will be drastically improved.

This is going to be Valencia's first match in the preseason and the first chance for all the fans to see the new and old players in action. In case you miss the match or can't watch it, don't worry as I'll be writing reviews of all the preseason matches.

Technical Details:
Formation: Have no idea, this is the first match and we'll see how Emery goes with this, if I had to make an educated guess I think he is going to start with a 4-3-3 formation and see how it goes from there.
Line-up: Diego; Bruno, Rami, Dealbert, Alba; Topal. Tino, Feghuoli, Piatti, Jonas; Aduriz.
Tactics: We'll see how the new defensive tactics Emery has been teaching work out.
Posted by SlickR at 12:58 AM
Email ThisBlogThis!Share to TwitterShare to FacebookShare to Pinterest
Labels: match preview
Newer Post Older Post Home