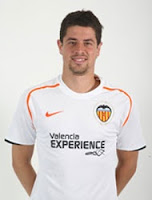 Del Horno has officially rescinded his contract with Valencia CF as announced at the official Valencia website.

The club wished his good luck and thanked him for his service to Valencia.

Del Horno came to Valencia CF in 2006 from Chelsea for 8 million, but since his first season in the club to his last day he has been unable to provide the kind of performances he had with Chelsea.
Del Horno's new destination may be Levante with whom he was on loan last season, though some other team may show some interest for him.
Posted by SlickR at 2:51 PM
Email ThisBlogThis!Share to TwitterShare to FacebookShare to Pinterest
Labels: news
Newer Post Older Post Home