Just few days ago Valencia CF played its first match of the preseason against PSV Eindhoven in which Valencia CF won 2-0 with goals from Piatti and Aduriz. Tomorrow is the next challenge in Austria and this time Valencia CF meets Leicester City FC. 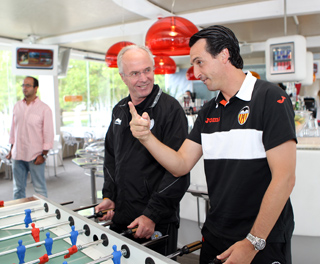 Leicester City FC is an English club based in obviously the same named city Leicester and playing in "the Championship" league. The championship league was formerly known as second division, but the FA thought that better names would give it more importance and exposure.

Leicseter City FC has already had a great preseason and went on an unbeaten tour in Sweden. They also played 0-0 with Bursaspor(the club that VCF destroyed in the champions league) on July 20th and tomorrow they will face Valencia CF.  They will also face Real Madrid on 30th this month and is going to be a nice measurement of sort to see how Valencia CF stacks up to Real Madrid, even though Real is with an advantage with playing more games so far and will be with an even better advantage until they get to play Leicester City FC.

The coaches of both clubs have gotten to know each other and already seem like best buddies having so much fun playing table mini football or whatever is called in English. 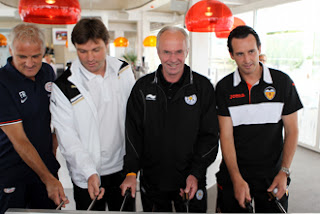 Valencia CF as you already know started the preseason very well, you can read my previous match preview to check how the training sessions went and my match report on how the match against PSV went. Suffice to say the preseason has been going well and with the added bonus of Juan Mata coming to Austria and joining the squad.

The training sessions the last 3 days have been very positive with a mix of stamina and physical workout and tactical training. The team I believe practiced few tactical movements in attack.

Emery played with a 4-2-3-1 formation last match, we'll see how he sets it up tomorrow, maybe he'll experiment and maybe not, we'll just have to wait and see.