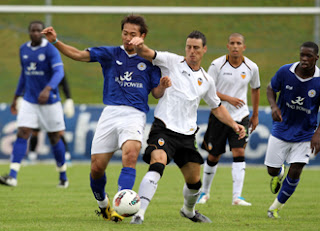 Valencia CF just won its second preseason match 1-0 over Leicester City FC. Valencia CF also won the trophy as this was a sort of mini tournament with 4 teams in it I believe with Bursaspor and PSV.

The match started slowly with both teams trying to control the midfield, but after 5-6 minutes Valencia CF became more comfortable and took the possession and initiative of the match. Maduro was quite good the first 30 minutes of the half time, really controlling the possession and spreading the ball well.
After a lot of pressing Valencia CF scored a goal with Aduriz on the left fooling a Leicester defensive player and crossing the ball to Jonas who hit a perfect volley and scored a goal.

From then on Feghuoli in particular would have more shots on goal, but unfortunately won't manage to score a goal. Schmeichel was actually beaten, but a defensive players managed to save their goal basically from the goal line and keep the score only 1-0 for Valencia.

The second half Unai Emery changed the whole squad again and having his debut this time was Daniel Parejo.
Second half was actually more interesting, but if you are a Leicester City FC fan as they had quite a bit of chances to equalize. While the second half our left side was way better with Alba and Piatti and even Pablo coming left, the defensive midfield and the center defense was worse as Topal and Portu failed to control the play and the Rami had at least 2 blunders and forced Diego Alves to come off his post twice to try and save the day. Dealbert was a bit better, but not very convincing either. 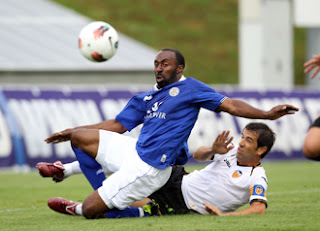 Pablo was really poor on the right and Soldado was once again too slow and rusty to do anything and he even had two good chances to score. Daniel Parejo was a welcome sight and had a very positive debut in which he carried the whole Valencia CF play at times.

Overall it was a good preseason match and this will show Unai Emery where and how to improve and lets not forget that our more creative and influential players like Tino Costa, Juan Mata and Ever Banega are yet to play.

Right now I'm personally really impressed with Miguel, Burno, Pardo, Alba, Feghuoli and Aduriz. This match I was also impressed with Parejo, but we'll see how he performs in the next match.

I'm really disappointed with Rami, Mathieu, Topal, Pablo and Soldado. Its still early though and I think the next match is really going to show the real quality and performance of the players and hopefully we'll also have Tino Costa and Mata ready to play.

Player Ratings:
Guaita 5.5 - Had few decent mini-saves
Bruno 6 - Great in defense, won all his tackles and very good in attack as well.
Costa 5  - Pretty good, had some good challenges
Pardo 5 - Quite good at the beginning, very comfortable with the ball at his feet and feeds the midfield nice.
Mathieu 5 - Decent defending, few runs forward, but nothing standing out.
Feghuoli 6 - Very active around the pitch, had 3 shots towards Leicester goal and good showing overall.
Maduro 5.5 - Great for around 25 minutes with good passing and keeping possession and then went missing.
Albelda 4.5 - Helped out in defense, had a few forward passes but that's about it.
Bernat 4 - Invisible for the whole match.
Jonas 6 - Decent performance, scored a goal, but failed to link up play in the final 3rd.
Aduriz 6.5 - Great performance from Aduriz impressing once again with an assist to Jonas. Also had a shot on goal and won few crucial headers.
Subs:
Diego 5.5 - Got off the line to clear a ball with a header, then had to do it again but the second time missed the ball with his foot and Leicester almost scored.
Miguel 5.5 - Very good in defense,  was not troubled at all, but did not go forward too much.
Rami 4 - Poor performance by Rami, lost his man on two occasions on the first occasion he was just outrun and on the second he missed the ball and failed to clear it, forcing the goalkeeper to come off his line twice.
Dealbert 5 - Managed to cover for one Rami mistake early on, but as Rami didn't look too comfortable.
Alba 6.5 - Just fantastic, good in defense and great in attack. His forward moves were always threatening and linked up quite well with everyone ahead of him.
Pablo 5 -Had one or two good moves, run a lot, but he is not creating any chances or making dangerous through passes.
Topal 5 - Great helping hand in defense, but fails to move the ball forward.
Portu 5.5 - More active than Topal and pushed forward more, but he as Topal fail to keep possession, spread the ball around or move the ball forward.
Piatti 5.5 - Had a few good runs on the left side, linked up few times with Alba, but falls to the ground too easily.
Parejo 6 - Really impressive debut from Parejo, great ball control, went down deep to move the ball forward, always open to receive a pass and along with Alba they share man of the match performance.
Soldado 5 - Very rusty, had two good chances, but in one he missed the ball and the other chance he shot straight in the goalkeeper.
Posted by SlickR at 9:06 PM
Email ThisBlogThis!Share to TwitterShare to FacebookShare to Pinterest
Labels: match report
Newer Post Older Post Home