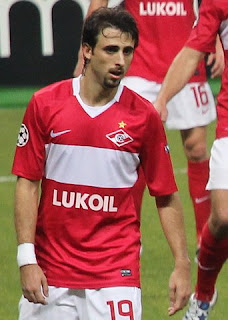 Spanish newspaper Marca is reporting that Valencia CF is interested in signing Nicolas Pareja who currently plays in Spartak Moscow.
Nicolas Pareja is 27 years old, is Argentine nationality and plays as center back. He has played once for Argentina senior national team and 5 times for Argentina U23 team in the 2008 summer Olympics.

Before he joined Spartak Moscow he played for Espanyol for two seasons and before that he played for Anderlecht for two years as well.

Reportedly Braulio Vasquez is going to travel to Moscow where he will meet with Spartak Moscow's representatives and inquire about the possible transfer for Pareja.

I'm not sure if this news is true or not, I believe it to be fabricated or maybe sort of inquiry about the player and price which doesn't mean anything, but if this news ends up being true that it is certainly bad business.
Nicolas Pareja is not worth 10 million euros, he is barely worth 5 million considering he missed half the season last season and previously he played for Espanyol, not really a big achievement.
Posted by SlickR at 1:14 PM
Email ThisBlogThis!Share to TwitterShare to FacebookShare to Pinterest
Labels: news, transfer speculations
Newer Post Older Post Home