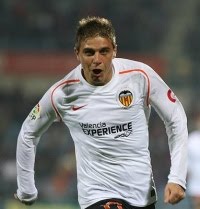 Just as I've already reported at http://clubvalenciacf.blogspot.com/2011/06/joaquin-sanchez-could-leave-in-next-24.html that a deal is very close between Valencia and Malaga about Joaquin, well now lasprovincias reports that a preliminary deal has been struck between both sides for 4.5 million euros.

I can tell you that Valencia staff is not very pleased with the deal, but will probably sign the deal after they make one more push to increase the transfer fee to 5.5 million euros.

I expect the deal to be signed tomorrow and revealed next week on Malaga's website.

I wish Joaquin the best of luck, he was an important player for Valencia, even though he never really lived up to his purchase price.
Posted by SlickR at 9:53 PM
Email ThisBlogThis!Share to TwitterShare to FacebookShare to Pinterest
Labels: news
Newer Post Older Post Home