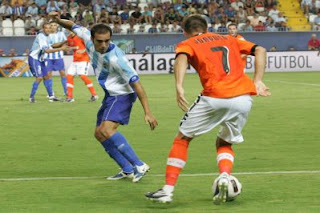 As I've reported yesterday and previously when I told you that within 24 to 48 hours the future of Joaquin will be resolved, today is the day that it was made official by Malaga CF website. Reports said it was going to be revealed Monday, in order to pump up the signing of Jeremy Toulan and not divide the attention, but I guess someone at their website didn't get the info.

Anyways as I've said yesterday in my previous post I wish Joaquin the best of luck in his new club and hopefully he and Malaga will not be a threat to Valencia CF in the new season.