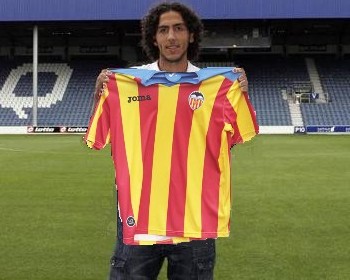 As I've reported 2 days ago here Daniel Parejo was officially cleared by Real Madrid and is now officially a Valencia CF player. He is still not yet officially represented and there is a deliberation now whether to be a presentation in the next days just on the official Valencia CF website or in person, when Parejo returns from the U21 tournament.

Daniel Parejo was purchased from Getafe for 6 million euros and a loan deal involving our goalkeeper Miguel Angel Moya, but wait here comes the bad part about this - Real Madrid have attached a 2 year buy-back clause on Parejo.

Valencia CF had agreed the transfer of Daniel Parejo for less than 6 million euros, but actually increased the payment to try and prevent Real Madrid snatching him out, because the current clause says that they must pay triple his current transfer fee to buy him back. This would mean if Real Madrid want to buy-back Parejo they would need to pay 18 million euros.

Real Madrid stood strong in their buy-back clause and Valencia crumbled in the negotiations, which I think were absolutely poorly planned. First of all I don't value Parejo at 6 million euros, second of all I don't like Valencia CF players having buy-back clause's and third I don't think Getafe's evaluation for the player of about 10 million euros at the beginning of the negotiations  should have been accepted by Valencia CF.

And I know I've been overly critical in my last 2-3 articles about Valencia CF business, but I feel that Valencia CF staff can't be taking these situations lightly and doing any mistakes when we are talking about such important topics.

This season could make or brake Valencia CF and if we don't do ourselves some justice this summer its going to be a long and tough season in which not everything will go our way. I think the 2 year buy-back clause should have been avoided, could have been avoided and even if it couldn't be avoided we should have looked at cheaper and better midfield options.
Posted by SlickR at 5:07 PM
Email ThisBlogThis!Share to TwitterShare to FacebookShare to Pinterest
Labels: news, official transfers
Newer Post Older Post Home