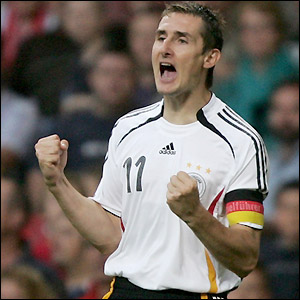 There have been reports in Germany, especially now in German Bild that Bayern Munich striker Miroslav Klose is basically days of signing an agreement with Valencia CF and becoming a Valencia CF player.

This is as you would imagine not true, Klose has had talks with Malaga about coming over there, but he is not going to join Valencia, never was and never will. Valencia is trying to sign Kevin Gameiro right now and only if the negotiations with Lorient fail, will Valencia possibly look for another striker.

But Miroslav Klose has been talking with other clubs in Spain, as well as clubs in England and would not be joining Valencia.
Posted by SlickR at 12:56 AM
Email ThisBlogThis!Share to TwitterShare to FacebookShare to Pinterest
Labels: news, transfer speculations
Newer Post Older Post Home