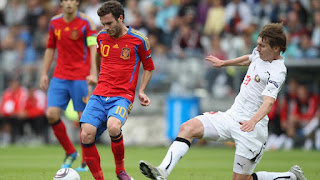 Spain U21 are in the finals, but not as everyone expected. If you'd asked any "expert" before the game they would have all told you that Spain U-21 are going to cruise to victory by 2 or 3 margin. Well the match turned out to be a lot more interesting as Belarus scored a goal in the 38th minute after a weird shot that luckily went into Spain's net. De Gea had absolutely no work, no saves to make for 90 minutes, except getting the ball out of his net.

As the second half started Juan Mata found itself in a good position to score, jumped to a cross, but was barely late to head the ball. After few minutes Juan Mata made a superb pass and found Adrian alone on goal, but the striker missed the goal with his shot.

Spain U21 managed to score a goal in the 89th minute and bring in into extra time and Mata was once again instrumental in Spain's win as he started the action that lead to Spain's second goal.

In the end Jeffren fired a powerful long shot and made it 3-1 for Spain U21 with Mata having a solid showing once again.
Posted by SlickR at 8:39 PM
Email ThisBlogThis!Share to TwitterShare to FacebookShare to Pinterest
Labels: news
Newer Post Older Post Home