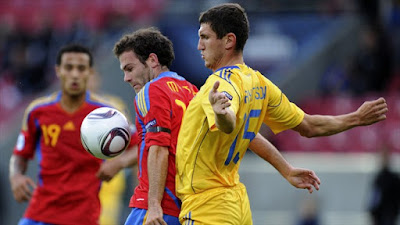 Spain U-21 squad faced Ukraine U-21 squad and beat them convincingly 3-0. Juan Mata was once again the main player on the field and scored two goals for Spain U-21 ensuring Spain placed first in the group and will be in the semi-finals.

For the first goal Mata was basically at the right place at the right time and with only the keeper to beat he scored. The second goal came from a penalty, but his overall play was very good as well, although not as striking as his previous performance.

Mata has so far scored 2 goals and provided 2 assists, making him a standout player so far in the tournament.

This tournament is very good for Mata as it makes Mata a better player, gives him more experience and its good for Valencia as well because he is our player and when he returns to Valencia he will come as an improved player.
Posted by SlickR at 10:51 PM
Email ThisBlogThis!Share to TwitterShare to FacebookShare to Pinterest
Labels: news
Newer Post Older Post Home