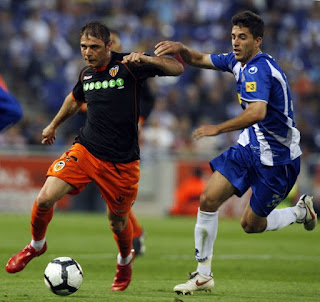 Latest reports suggest that Joaquin wants to continue with Valencia and feels good in the team and in the city, but is unwilling to take a proposed pay cut of 2 million euros, or in other words from 3 million euros salary he gets right now to 1 million with the new proposed contract.

Joaquin obviously wants 2 million from Valencia if he is to consider staying, while reports suggest that Joaquin will earn about 2.4 million euros in Malaga.

Let it be clear that Joaquin Sanchez has in fact reached an agreement with Malaga, this agreement was reached even before the season ended and basically Joaquin is sort of using the agreement with Malaga to get Valencia to pay him at least 2 million euros salary to stay with the club, or else he will just move to Malaga. Valencia would not like to loose him next season for free, but there is another problem and that is that Malaga are prepared to offer only 4-5 million euros for the release of Joaquin right now, while Valencia would like to get around 8 million euros.

Right now Valencia has 3 options:
Option 1: Give Joaquin a 2 million per season contract, increasing Joaquin stay to 2014.
Option 2: Keep Joaquin for another season with his current contract and loose him for free next season.
Option 3: Continue negotiating with Malaga and try to increase the transfer fee to at least 6 million euros or more.

Option 2 is just outright the worst thing that can happen and its almost impossible that the team is going to go for that option. Basically this option would ensure a huge salary for Joaquin which is not something Valencia wants and then loose him fro free the next summer. This is a no gain option for Valencia in any regard.

Option 1 would also be a loose situation for Valencia. What Valencia wants to do with these new contracts is to reduce its annual salary expenditure and allow the team to gain bigger profits so it could pay off interest from the bank, but also return some of the loan and gradually reduce the interest rate.
So having Joaquin earn 2 million or more defeats the purpose of the new contracts and its quite unlikely Valencia is going to reach Joaquin's salary demands.

Option 3 makes the most sense and unless Joaquin has a change of heart and decides to stay in Valencia at all costs, its highly likely Valencia will sell him. The biggest problem right now is that Malaga has offered 3-5 million euros, 3 million being the initial offer and 5 million being the max offer.
It all comes down to how much Joaquin is valued and the negotiation skills of both the parties. For example transfermarkt values Joaquin at 10 million euros, I personally value him 8 million because of his expiring contract, otherwise I'd say he is probably worth 10 million.
Posted by SlickR at 4:28 AM
Email ThisBlogThis!Share to TwitterShare to FacebookShare to Pinterest
Labels: feature, news, transfer speculations
Newer Post Older Post Home