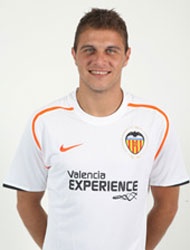 As soon as the season finished, reports started coming out stating that Malaga wanted to purchase Joaquin and as time progressed the reports have been stronger and stronger, with reports recently saying that Joaquin wants to leave and that he has reached an agreement with Malaga and just waits for Valencia to agree the transfer fee with Malaga.

Valencia CF president Manuel Llorente offered Joaquin a two year extension, but with a pretty big pay cut and it seems the player has rejected the offer and went with Malaga's offer which offers him more money. Obviously Joaquin is a player only interested in his monetary situation and not his sporting one and not to mention the club situation.

But he is too old, too inconsistent and I feel like this season was probably his best since he signed with Valencia and I think his level will drop dramatically next season. The fact that Malaga want to purchase him is actually good news for Valencia as we can now cash in something on him, offload him since his prime has been over for a long time and he will only get worse and worse, not to mention Valencia will be saving about 3 million euros early when/if Joaquin is gone.

Having said all this Valencia should not give him for free and if we can negotiate between 7-8 million euros that would be great. If Malaga try to get him for 4-5 million euros we should immediately reject it and keep him even though he would leave next season for free. I think Joaquin value is around 6-8 million euros, it would have been more, but he has only 1 year left on his contract so its almost impossible to get 9 million or more for him.
Posted by SlickR at 4:07 PM
Email ThisBlogThis!Share to TwitterShare to FacebookShare to Pinterest
Labels: news, transfer speculations
Newer Post Older Post Home