Ah, don't you just love summer. Not only for the hot weather and girls wearing less clothing , but also because of all the interesting transfer talk and speculation going around in the world of football. 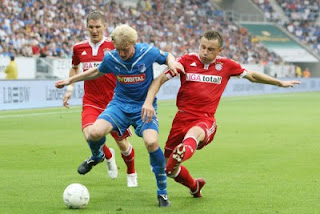 Reports from Germany suggest that Hoffenheim, the club Andreas Beck plays for has officially put Andreas Beck on the transfer market in order to get as much money from his transfer as possible. Obviosly Valencia is tracking this player as he is one of the possible candidates to replace Miguel Brito at the right back position.

His current price is about 6 million euros, but with this latest move and call from Hoffeinheim president for offers for the player, who is also part of the German national squad is likely to rise and we are looking at 8-9 million euros.

Other in the news is more reports about Chori Dominguez and his final destination, which as in the movies can't be changed and he is 100% leaving Valencia one way or the other. There have been increasing reports from England that that may be his destination, as well as the older reports of him returning to his previous club Rubin Kazan and even Zenit St. Petersburg.
Right now though its a long shot to predict, but if I had to give an answer I'd have to say he is going to go back to some of his former clubs.

Last but not least is Valencia CF resident model, part time midfielder and of course he would say goalkeeper, but that is something we Valencia fans have not seen. And this is not making joke on the player, he is actually very good and the times he was on goal this season he was superb, you can check my rating section to see his rank, but he was good, but its more of a poke at the club who often uses him as model, Emery who uses him as midfield, but rarely for the goalkeeper that he is.

Anyways latest reports are that  Zaragoza and Getafe have joined the list of clubs who want to get him in their ranks. Lets not forget that Sevilla are reportedly still keeping a close eye on him, as is his former club Real Mallorca. Right now Moya is worth about 2 million to 2.5 million euros, a far cry from the 5 million Valencia spend to get him.
Posted by SlickR at 7:39 PM
Email ThisBlogThis!Share to TwitterShare to FacebookShare to Pinterest
Labels: news, transfer speculations
Newer Post Older Post Home