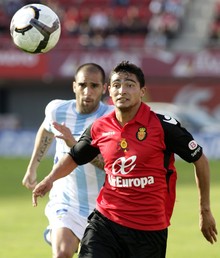 Valencia CF are considering purchasing players and strengthening the squad this summer and one of the favorites to be purchased is Chori Castro, the left winger from Mallorca.

With Vicente Rodriguez almost surely leaving this summer, since his contract will run out and the team won’t renew with him, there is a need for a back-up for Mata on the left wing and Chori Castro fits perfectly, as he is a good player and will come cheaply.

Valencia has followed him this whole season and it’s said that Braulio Vazquez went to watch the Mallorca match several hours before the Valencia match and was specifically watching Chori Castro and defender Ivan Ramis. Both have impressed this season and have shown some great games, especially Castro.

Now Radio 9 program 'La Taula Esportiva' is reporting that Braulio has been in contact with Mallorca and that the teams are very close to agreeing about the transfer of Chori Castro, which the radio reports is in the region of 1-2 million euros.
Posted by SlickR at 2:37 PM
Email ThisBlogThis!Share to TwitterShare to FacebookShare to Pinterest
Labels: transfer speculations
Newer Post Older Post Home