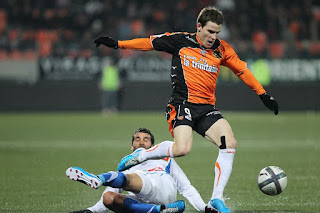 Last day of the championship on Sunday and the 50th goal of Kevin Gameiro in the colors of FC Lorient in the league, his 22nd of the season. This new realization was not enough to dethrone Lorient striker Moussa Sow, who, at the same time, scored a hat trick (his third this season) against Stade Rennais.

With the French league officially over Kevin Gameiro future at Lorient is set to be resolved in two weeks. Kevin Gameiro wants to transfer to Valencia CF and has told Lorient president about his decision and expects to know about his future in two weeks time, so that he is at ease in the summer.

The problem with the transfer is obviosly the transfer fee. The club want to sell Gameiro, Valencia want to buy him and the player himself wants to join Valencia, but the problem is that Lorient want to get between 10-12 million euros for him, while Valencia are willing to give between 6-7 million euros.

He is a first class striker and Lorient want to sell him, otherwise they would loose him next year for free, so Valencia president must make all efforts to sign him and yet not break the bank, so its a fine balance to keep.

Hopefully Valencia fans would see him at the Mestalla next season as he is one of the best strikers right now in Europe. In fact 11 clubs offered to buy Gameiro, but he reportedly refused all 11 clubs just to come to Valencia.
Posted by SlickR at 8:32 PM
Email ThisBlogThis!Share to TwitterShare to FacebookShare to Pinterest
Labels: news, transfer speculations
Newer Post Older Post Home