Emery stops a fight between the Valencia players 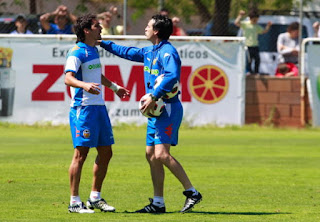 Well you'd think that after so many suspensions and disciplinary actions these things won't happen, but they do.

The players returned to training today following the 3-0 victory over Real Sociedad and you'd think it'll be a relaxed or at least pretty happy session, but the reserves played with big intensity, trying to get in the first place by showing the coach what they know, but as the heat got up and the competitiveness went through the roof, an argument started between goalkeeper Cezar Sanchez and Jordi Alba.

Cezar was unhappy with Alba's performance and displayed his frustration with Alba's performance several times with the culmination happening when he approached Alba and told him that he is playing bad, well Alba replied in an inappropriate manner and all while Vicente was dissatisfied with how Cezar treated Alba and went on to confront the veteran goalkeeper, luckily Emery was in close proximity, ran at Vicente and stopped him, separating the players and certainly getting things under control and stopping a major fight or something that everyone is no doubt going to later regret.

These things are unacceptable in Valencia and players should be more flexible, especially after playing together for 2 or more years. I'd give everyone a monetary punishment and Alba a sporting one as well, since he is young and needs to learn that these things are inappropriate.
Posted by SlickR at 6:01 PM
Email ThisBlogThis!Share to TwitterShare to FacebookShare to Pinterest
Labels: news
Newer Post Older Post Home