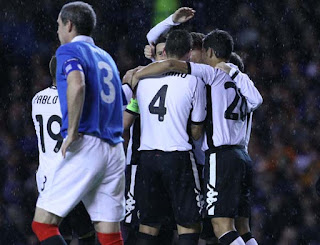 The season is about to close, its been a roller-coaster of a ride with ups and downs, frustrations and happiness, but the objective in the end has been met. Valencia CF is in 3rd place with this last match against Deportivo not meaning anything.

Its been a long season, it the Spanish championship as well as in Europe. Valencia CF got knocked out of the Champions league in the R16 from Schalke 04. The domestic cup fight also ended prematurely with Valencia CF being knocked out from Villarreal.

Still I guess 3rd place is better than most of Valencia's direct opponents did, clubs like Villarreal, Atletico Madird, Sevilla and Atletico Bilbao.

Without straying too far off from this match, Valencia will play with 3rd place secured, but the players will try to win as Unai Emery has suggested and finish the season officially on a high.

Deportive La Coruna on the other hand need a win if they are to avoid relegation, but any other result other than that and they will depend on Real Zaragoza result.

I would have liked Emery to bring some of the youth players to this match and see how they perform and test out the squad for next season, but no he is sticking to his guns and will probably play the best squad.
Posted by SlickR at 11:54 AM
Email ThisBlogThis!Share to TwitterShare to FacebookShare to Pinterest
Labels: match preview
Newer Post Older Post Home