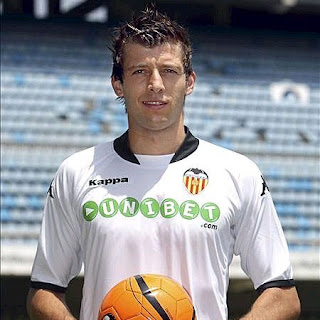 Well judging by the poll in which visitors voted it seems you deem Angel Dealbert the worst player this season.
Now yesterday there were 89 votes, but since the poll works so weird and you can recover the vote, now there is only 49 votes, but whatever the case may be I've already seen the result and Dealbert lost by 1 point and even with 49 votes Dealbert and Chori both share worst player.

My ratings for Angel Dealbert is 5.46 and my rating for Chori is 5.68, so Chori is actually pretty average overall at least compared to the rest of the team with the majority of players having a low rating of 5 and very few having a rating of 6. Cezar Sanchez is the best player with a rating of 7.

This is all in preparation for my article on best and worst player for Valencia CF that I'm writing and will publish when the season ends.
Posted by SlickR at 6:28 AM
Email ThisBlogThis!Share to TwitterShare to FacebookShare to Pinterest
Labels: feature
Newer Post Older Post Home