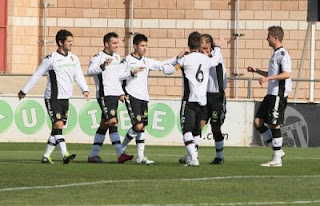 Well the main team lost to Real Madrid pretty badly, but there is at least some comfort to be found in the fact that the youth team Mestalla have become champions in their group in the trecera division in Spain. Its not a huge achievement, but its a step forward from the past years where the youth team was talk of laughter and despair.

Mestalla are champions and with style after beating La Nucie who were second at the time. Right now Mestalla are first place with 79 points, 13 points more than second placed Olimpic.

VCF Mestalla are going to be competing with 16 other teams for access to Spain 2nd B division and are going to basically have 2 chances to get in. Its going to be hard, but I think they have the quality with the likes of Isco, Paco, Gil, Montoro.

Right now Paco is second on the scoreboard with 19 goals, Isco is second with 14 goals. So the chances to qualify for 2nd division are pretty high and hopefully Valencia youth team will be playing 2nd division B next year.
Posted by SlickR at 10:46 AM
Email ThisBlogThis!Share to TwitterShare to FacebookShare to Pinterest
Labels: news
Newer Post Older Post Home