Valencia CF absolutely dominated over Villarreal and beat them 5-0. In fact Villarreal defense most of the time looked like little kids to the powerful Valencia CF attack, which furiously bulldozed through their defense and absolutely dominated all match long. Not that Villarreal didn't have chances to score a goal themselves, they did in fact come close to scoring 3 times, but were luckally denied by some good defending, especially from Stankevicious who made few crucial interceptions. 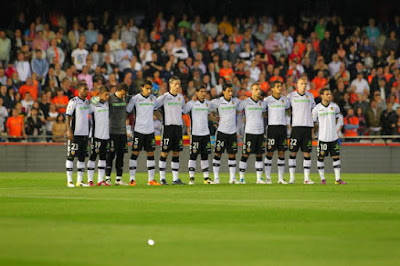 From the start Valencia CF started with full control over the game and went on the attack. Miguel Brito after a lenghty pause with suspension from the club was playing admiarablly and a lot of the chances were coming from him on the right side. There was a good cross first with Topal header going just wide off goal and then came a great through pass from Miguel to Soldado, with this one not missing the opportunity and scoring a goal. It was 1-0 for Valencia CF.

Valencia CF continued dominating and had several more chances to increase the score, Miguel yet again found Soldado with a through pass, but the attacker failed to score.

Just few minutes later a good through pass from Tino put Soldado on chance again, but once again Soldado failed to score.

With Tino Costa getting injured and getting taken off for Dealbert, Valencia CF lost a little bit control and Villarreal made few chances and tries towards Valencia CF goal, but Ceraz and Stankevicious saved the day and the result ended 1-0 for Valencia CF at half time.

The second half started with Villarreal with more control and better play in the first 5-6 minutes, but then Valencia CF took over again and never looked back. 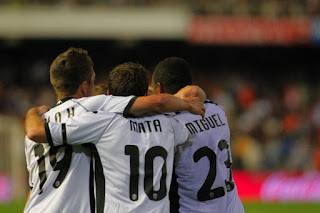 In the 55th minute Valencia CF would score again with Mata starting the attack, running forward and then doing a fast one-two with Banega and Mata was through on goal with just the keeper to beat, he scores and Valencia is up 2-0.

In the 62nd minute Valencia CF will score again, Pablo recieved the ball quite deep into Villarreal's teritory, run past one defender and passed the ball to the oncoming Ever Banega who easily slotted the goal in the net. Valencia CF 3-0 over Villarreal CF and the match was begging to feel like over, at least for Villarreal, though Valencia will go on to score two more times.

The fourth goal came from a good build-up by Soldado, who made a through pass to Pablo, this one with an assist towards Mata, who didn't have problems scoring to an empty goal. Valencia CF were basically playing very good, attacking very well with good build-up play and good individual movement.

With Villarreal's defense in shatters and completely disorganized it was pretty much right for them to receive one more goal, someone gave the ball away right to Topal who had easy time passing the ball to Soldado who sort of chipped the ball and lobbed the goalkeeper to make it 5-0, the final result.

Fantastic match with absolutelly positive score and result. Valencia CF are now still third in the table, but with 6 points ahead on Villarreal and the better side in the head to head matches with a draw away to Villarreal and tonight's 5-0 win at home at the Mestalla.

Player Ratings:
Cezar 6 - Made one good save, had a little mishandling, but largely untroubled, he had a confident performance.
Miguel 7 - Brilliant first half, best player in the first half, provided the assist to Soldado's first goal and almost had a 2nd assist to Soldado again.
Stankevicious 7 - Brilliant performance where everything he did was great. Had few crucial interceptions to keep Valencia CF from conceding a goal.
R. Costa 6.5 - Good performance from Costa as well, a little bit less effective than Stankevicious though.
Mathieu 7 - Good performance from Mathieu, went forward often enough, had a good assist to Pablo that could have put VCF even more forward, had also one shot that was a bit inaccurate.
Topal 7 - Slotted in a somewhat strange position between DM and CD, changed positions with Stankevicious, generally useful, covered in attack well and also provided good depth going forward with 1 assist and few good forward runs.
Tino Costa 6 -  Good until injured, had one great through pass and generally active and useful.
Banega 7.5 - Had some questionable passes and somewhat insecure after Tino left injured, but came back and provided a good performance with good ball control, passing and scored a goal himself.
Pablo 7 - Somewhat average first half from Pablo, but opened up in the second and became more active and really helped the team win with some good moves, passes and assist.
Mata 8.5 - Now this is the Mata I'd like to see, two games in a row with super performance, man of the match performance no doubt. Scored two goals and I believe he had an assist also.
Soldado 7.5 - Great once again. Full of running, always in dangerous positions and really useful to the team. Scored two goals, the second one especially good, could have scored at least 2 more times, but this is a good performance nevertheless.
Subs:
Dealbert 6.5 - Came in for Tino Costa, but ended in the back, had one bad situation as usual, but other than that had a very good match alongside R. Costa.
Albelda 6 - Not too much time for him to do anything, but provided some more defensive cover to close out the match.
Aduriz N/A - Not enough time.
Posted by SlickR at 11:05 PM
Email ThisBlogThis!Share to TwitterShare to FacebookShare to Pinterest
Labels: match report, results
Newer Post Older Post Home