Mata to be sold this summer? 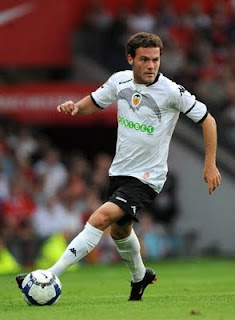 Like it or hate it, Mata is a key player for Valencia CF and even though he has his frequent ups and downs he is so far the most important player for Valencia CF with 13 assists in all competitions and 6 goals. He is also a versatile player capable of playing as left winger, attacking midfielder, center forward and striker.

Apparently there are several clubs keeping close tabs on Mata and are interested in purchasing him.
First up is Manchester City, which tried to bring Mata last summer along with Silva, but Valencia management did not sell Mata and instead sold Silva. They are reportedly willing to pay up to 22 million euros to get him.

Chelsea are reportedly also on the lookout and Mata fits their bills as he could play just behind the striker, Torress in this case and also on the left in a 3 man attack.

There are reports from Italy as well, suggesting that Inter Milan and Juventus are interested in signing Mata as well.
Juventus have been following Mata for 3 seasons now, before that they followed Silva, though they have not made an official offer as far as I know for Mata.
Apparently Inter is also looking so strengthen their left side with young and talented players and Mata is first on their list of reinforcements this summer.

The Italian clubs are said to be willing to dish out 25 million euros and even more to get the services of Mata.
Posted by SlickR at 5:39 PM
Email ThisBlogThis!Share to TwitterShare to FacebookShare to Pinterest
Labels: transfer speculations
Newer Post Older Post Home