Felix Magath predicted an all-action conclusion to FC Schalke 04's round of 16 tie against Valencia CF, with Unai Emery having "a clear plan" as to how to turn the tie in the visitors' favour. 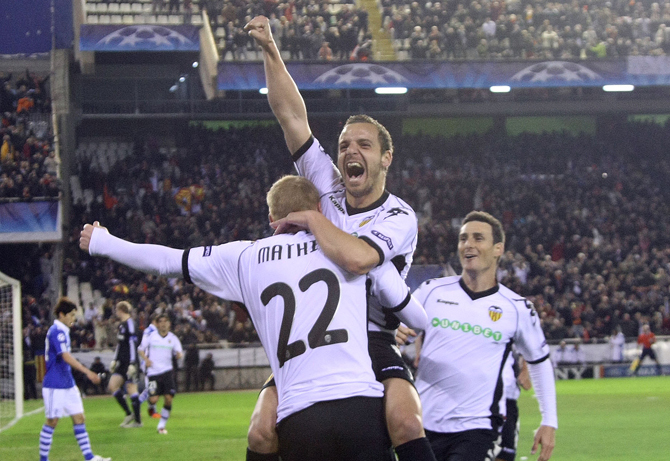 Felix Magath is more than pleased with the form of his transitional FC Schalke 04 side and is adamant that they will not look to cling on for a goalless draw at home against Unai Emery's Valencia CF following a 1-1 tie in Spain in their UEFA Champions League round of 16 opener.

Felix Magath, Schalke coach
I have been brought here to start a refit of the club. We are right in the middle of this process, and I am very pleased so far. We are playing well in the Champions League, which is something I had promised, and we have reached the German Cup final, winning at [FC] Bayern [München] in the semi-finals. Considering this is a transitional year, we have achieved quite a lot.
Playing for a 0-0 draw against Valencia is too risky. Experience shows that pressure tends to mount towards the end of games like this and you never know if you will be able to cope. Any late goal could be a winner, so there is no way that we will drop deep and wait. Valencia have to score and they have their weaknesses at the back, so they will most likely play attacking football too. It will probably be a fascinating game to watch.

Unai Emery, Valencia coach
We know Schalke have a small edge on us due to their home advantage. They are not doing so well in the Bundesliga, but they are strong in the cup and the Champions League, and they will punish every mistake we make. However, I am certain that we will put in a good performance.
We can play better as a team than we did in the first leg, but the first leg is history; only this game counts now. We have formulated a clear plan and now have to put it into action. Schalke have their own style and are a great side, which they showed with the 1-1 draw in the first leg. They are a very strong side that can keep up the tempo for 90 minutes, but we know where our strengths lie.

Team news
• Schalke
Klaas-Jan Huntelaar (knee) will not feature, with Magath explaining: "He is making progess, but cannot play yet." However, the coach was in no mood to reveal Schalke's attacking plans. Lukas Schmitz is serving a one-match ban while José Manuel Jurado is within a booking of a suspension.
• Valencia
David Albelda is available after serving a one-match ban in the first leg, while Aritz Aduriz is available after shaking off an ankle injury, though he will miss his side's next match if he is booked. The striker said: "We have to attack in a controlled fashion and not go mad and leave ourselves exposed to their counterattacks."

Latest results
Saturday: VfB Stuttgart 0-1 Schalke
(Kuzmanović 15pen)
Benedikt Höwedes was sent off for the handball that led to the penalty as Schalke lost to a Stuttgart side that began the day second from bottom in the Bundesliga. It was the defender's third dismissal of the season. He had never been sent off before this term.
Saturday: RCD Mallorca 1-2 Valencia
(Ramis 31pen, Pablo Hernández 33 56)
Pablo Hernández scored twice in a Liga game for the first time in his career to take his league tally to five for the season – equalling his best total, set last term. It was only Emery's team's sixth victory in their last 14 away games in all competitions although they have won their last three away fixtures.

Did you know?
The sides' two previous games in Gelsenkirchen ended in a win apiece. Valencia triumphed 1-0 in the 2007/08 UEFA Champions League group stage with a second-half David Villa goal while ten years previously, in the UEFA Cup quarter-final second leg, Schalke's 2-0 home win sent them through.

Result prediction:
Schalke 04 1-1 Valencia CF; Extra time: 1-2
I think Valencia will come out attacking from the start in order to score an early goal, but that won't happen. It probably going to happen in the second half, but Schalke will equalize and with the same result as in the previous leg the match will go into extra time. Then in the last 2 or 3 minutes Valencia will score the winning goal.
Posted by SlickR at 12:53 AM
Email ThisBlogThis!Share to TwitterShare to FacebookShare to Pinterest
Labels: match preview
Newer Post Older Post Home