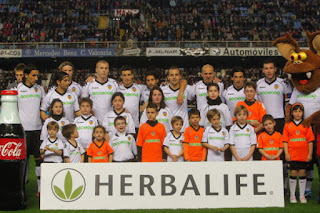 Valencia CF had a great weekend, after every possible result going its way, from Villarreal loosing, Atletico Madrid, Sevilla and Espanyol all loosing and allowing Valencia CF with 3 points to catch up to Villarreal, as well as get away from the closest club behind it, Espanyol.

It was all down to Valencia CF to get the 3 points and climb to only 1 point behind Villarreal and escape Espanyol and right now Atletico Bilbao, who after their win are one point ahead of Espanyol.


Unai Emery decided to go with the formation that he used in the second half in the last match with few minor changes to the line-up. For example Topal took Maduro's place as a defensive midfielder and Bruno took Miguel's place, since Miguel has been hit with big personal problems and is facing 5 years in jail.


The match started with low tempo, though as early as the 4th minute Tino Costa had a shot on goal, but the ball went wide.

Valencia CF was having most of the possession and was slowly pushing towards Hercules goal. In the 12th minute Ever Banega also tried his luck with a long range effort, but his shot went wide also.

Hercules managed a rare counter attack in the 18th minute and tried to threaten Valencia's goal, but couldn't really make anything out of it.

Valencia was having control of the ball, but the chances weren't easy to come by. Banega tried a long pass to Bruno in a dangerous area to Hercules, but Bruno failed to control the ball and it went into goal kick.
Hercules countered and after a good link-up Abel send a powerful shot towards Valencia's goal, but it went over the crossbar. 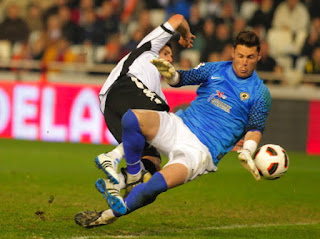 Valencia had another good chance to score a goal in the 38th minute after a corner by Tino found Topal, but his shot only managed to hit the bar even though he shot from just few meters away from goal.

The match seemed destined to finish 0-0 at half time, but then Navarro send a pass to Soldado who made a superb pass through a Hercules defender legs and found Aduriz and this one somehow luckily scored a goal in the 42th minute. In fact I'm not even sure if Aduriz touched the ball, though it somehow went into the net. Magic maybe? 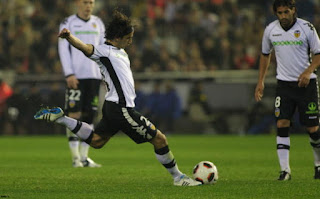 The second half started with Valencia again in control of the ball and once again this will pay off, as Tino Costa managed to score a goal in the 53rd minute of the match from a well taken free kick.

After the second goal Valencia seemed to go down in lower gear and the play eased up a  bit with neither side really pushing towards goal and a good 15 minuted were played solely in the middle of the field. A rare chance came towards Soldado who headed the ball towards goal, but it didn't went in.


Aduriz had a claim for a penalty in the 75th minute after he fell down in the penalty area, but realistically he failed to make the most of a great pass to him and should have scored a goal then.

Hercules mounted a good attack in the closing stages of the match after a Stankevicious mess. As it turns out Stankevicious decided to dribble against a Hercules player with the goal totally exposed and lost the ball. After a rebound from Topal the ball came to one of Hercules attackers, but Guaita made a terrific save to deny Hercules a goal.

Ultimatelly the match ended in a 2-0 victory for Valencia, a victory that puts it into a good position with just 1 less point than Villarreal.

Player Ratings:
Guaita 7 - Great save in the 81st minute to deny Hercules a goal. Had few more good saves.
Bruno 6.5 - Unspectacular but effective in the back, reasonably good going forward.
Navarro 6 - Did not have too much to do, but nothing really messy and did a good job.
Stankevicious 5.5 - Had a great match and then decided to dribble and gave Hercules the ball and a huge chance to score. Other than this huge mistake he had a great match overall.
Mathieu 7 - Solid defensively and offered good support going forward as well, had a bit more trouble later on when Drenthe came in for Hercules, but still won most of the duels.
Topal 6 - Very good positioning, kept things simple with short safe passes and helped out in defense when needed.
Banega 7 - The driving force in the midfield, spread the ball well and had great one-two passes with Tino. Had few shots, but most importantly kept possession for Valencia.
Tino 7.5 - Scored a superb goal as usual, very active all over the field, fought for every ball and came back sprinting to help in defense every time.
Chori 6 - Good showing, although not very influential. He had two great through passes that found their target, but regrettably the players would not use them.
Soldado 7 - Once again a great performance from Soldado. Unlucky not to get on the score board himself, but set up Aduriz goal with a superb pass and played really well, especially linking-up with Aduriz.
Aduriz 6 - Scored a goal, but failed to convert many opportunities. Found good positions, but as I've said he failed to convert many opportunities he had.
Subs:
Isco 5 - Had few touches with the ball, but you can see that he was very anxious and made several mistakes. He needs more confidence and more playing time in the first team obviously to iron out the mistakes and be more calm and confident.
Alba N/A - Not enough time
Joaquin N/A - Not enough time
Posted by SlickR at 11:53 PM
Email ThisBlogThis!Share to TwitterShare to FacebookShare to Pinterest
Labels: match report, results
Newer Post Older Post Home