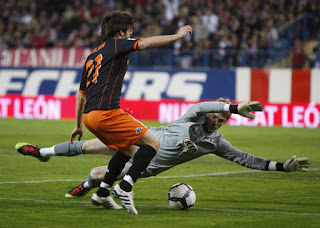 One of the biggest rivalry Valencia CF has is with Atletico Madrid. While teams like Hercules and Levante are the historical rivals, they have barely played against Valencia and realistically the rivalry stands as one of a more historical value than it really is.
The rivalry with Atletico Madrid is real though, since these are two teams that have been almost equally successful through the history of the Spanish league and have always exchanged punches. Valencia is the one with a slight advantage in success, but Atletico is always trying to overcome Valencia.

These two teams have played 141 matches against each others and both clubs have 52 wins each. In fact in recent times these two have been so equal that last season, as well as this one all matches, but one have ended in a draw. Yes, the only reason Atletico Madrid advanced in the Uefa Cup, now the Europa cup is because of the away goal rule.

This season Valencia has a chance to revenge last seasons Uefa cup dismissal from Atletico Madrid by beating them on their home ground in front of their own fans. Valencia has so far had a quite well season, while Atletico Madrid has been struggling a bit and are under pressure to perform and bring in good results.

Atletico Madrid currently sit at 8th position on the table with 30 points, 14 less than Valencia CF who sit at 4th spot, only 1 point behind Villarreal.
Atletico Madrid has scored 31 goals and conceded 29 goals, which is a pretty good result statistically speaking, the problem is that they have conceded goals when drawing and thus resulting in a loss and no points.

Atletico Madrid squad: to be announced...


Valencia CF on the other hand are one point behind 3rd placed Villarreal and are on a unbeaten run of 8 matches. Everyone will want to continue this streak and with the way Atletico Madrid have been playing, a win is also not that far off.

Valencia CF Technical:
Formation: 4-2-3-1
Line up: Guaita; Miguel, Stankevicious, R. Costa, Alba; Topal, Tino Costa, Joaquin, Vicente, Chori, Soldado.
Tactics: N/A
To tell you the truth, I have no idea what formation Emery is going to use or the tactics for probably the only second time in the season.
Valencia is playing away and from one side Emery could go the safe route and establish a 4-2-3-1 formation, or he could really open up and set up the 4-4-2 formation, as we now have the players. We have 4 attackers and we can not fear one not playing well or getting injured, since we have it covered.

Result prediction:
Atletico Madrid 1-2 Valencia CF
These teams have more draws in recent times than Barcelona has wins. Depending on how we open up this match I expect either a draw or a victory. Historically I would call this a draw, especially since Valencia play away from home, but Atletico Madrid have been playing really poorly and I hope Valencia can take advantage of it and win.
Posted by SlickR at 11:23 PM
Email ThisBlogThis!Share to TwitterShare to FacebookShare to Pinterest
Labels: match preview
Newer Post Older Post Home