Bravo for the referee and all the referees who are blind and stupid. How many times are referees going to make calls against Valencia? Red cards. yellow cards, penalties you name it, Valencia CF is always on the receiving end. 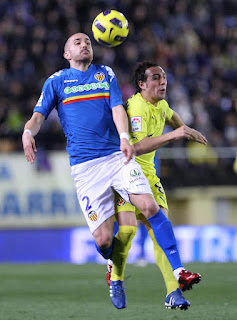 The match started as good as it can possible get. Ever Banega shot at goal at the 5th minute and with the help of Villareal goalkeeper the ball went into the net and it was 1-0 for Valencia.
Things got even better in the 22nd minute as Soldado got to a superb cross from Maduro and with a difficult move stopped the ball and than chipped it into Villarreal's net.
Valencia was leading 2-0 on 22 minutes into the match on Villareal's own ground. As the players managed to bring the game into the brake there was all the hope that this would be a wonderful win and a sign of maturation from all Valencia players.

As soon as the second half began we were doomed. 2 minutes into the second half and Villarreal equalized due to poor marking by all defensive players, but mostly because Stankevicious allowed 2 meters breathing space to the player he marked.
As has been usual for a lot of time now the referee had a say on who is going to win the match and only 1 minute later awarded Villareal a penalty by the main offender in this match non other than Stankevicious.
From that point on Valencia never recovered and managed to destroy everything it accomplished in the first half. Soon enough Ruben found himself alone and unmarked by the defense and easily scored the third goal for Villareal, but as if that wasn't enough Valencia went into a poor offense and left the back exposed and Villareal made it 4-2.


Player Ratings:
Guaita 5 - Could not be blamed for any of the goals, though he probably should have done better for the third goal.
Bruno 5 - Brilliant first half performance and then went missing in the second half. He was nowhere in defense and offense.
Stankevicious 2 - Terrible performance this night. Was decent in the first half with one mistake and one 2 good clearances, but he was just terrible in the second half. Gave Villareal attackers at least 2 meters space and was in the wrong positions all the time. Also partially responsible for the penalty, although it was a very harsh call.
Dealbert 5 - Had few good clearances, but than came the second half and he went from decent to bad.
R. Costa 3 - Poor match all round. Made one big mistake in the first half and then made several big mistakes in the second.
Mathieu 4 - Didn't do anything all match long until the end where he got injured by barely colliding with a Villareal player. Seems as he doesn't care for the team and should be sold as soon as possible!
Joaquin 5 - Good first half with good corners delivery, but went to bad in the second half with mindless runs that didn't result in anything.
Maduro 6 - Second best player on the field, but made a lot of bad passes and inaccurate high passes in the second half
Banega 6 - Scored a goal and was generally useful to the attack and defense. Has no match form as he has been playing very little this season.
Mata 5 - I could barely see Mata all match long. Apart from popping out here and there it was a mediocre performance and a ton more is expected from him.
Soldado 8 - Best player on the field. Scored a wonderful goal, made crucial interceptions, fought hard and run non-stop all match long. Man of the match performance.
Subs:
Topal 4 - Came in and didn't do much of anything. Apart from 2 decent covers in Valencia's penalty area no other significant impact.
Vicente 5 - Could not assert himself into the game. Had two or three runs, but nothing really beneficial.
Alba NA - Not enough time, though immediately more active in going forward than Mathieu.
Posted by SlickR at 8:24 PM
Email ThisBlogThis!Share to TwitterShare to FacebookShare to Pinterest
Labels: match report, results
Newer Post Older Post Home