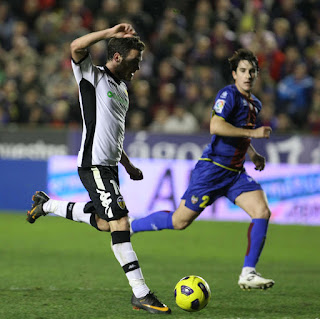 Tomorrow Valencia CF will welcome Deportivo La Coruna to the Mestalla in yet another important match.
After the loss to Villarreal in the Copa Del Rey coach Unai Emery has said this can be an advantage to Valencia and that having less matches will help Valencia be more competitive in the Spanish league and overtake Villarreal in 3rd position.

The Copa Del Rey loss was not taken well with the fans and the Valencia board and president Llorente, so there has been numerous meetings between all the staff in order to lay out the objectives for third place finish in La Liga and tighten up some of problems in recent weeks like lack of stamina and fitness.
Currently everyone at Valencia from the coaching staff, fitness staff and doctors are under pressure to deliver good results and collectively help Valencia to reach its season objectives.

Valencia is currently 4th in the standings with 34 points, 2 behind 3rd place rival Villarreal and a win tomorrow may theoretically bring us to third place, assuming Villarreal loose their match tonight.

Deportivo La Coruna are  currently 13th on the table and while they are a tough team to crack and good defensively, they are desparate in attack and would probably not score even if there was no goalkeeper in their opponents squads.
Their away record is also poor and they have only won two times, drawn two times and lost five times.

Result prediction:
Valencia CF 2-0 Deportivo La Coruna
Valencia is good enough to beat Deportivo especially on home terrain. Deportivo on the other hand can't score goals even if their opponents played without goalkeepers so I don't expect them to score.
Dominguiez has had a surprisingly great training and is likely to start especially since Aduriz is missing due to suspension.
If Valencia play even decent they should win this match, though Deportivo is a good team defensively and will not give up easily.
Posted by SlickR at 6:08 PM
Email ThisBlogThis!Share to TwitterShare to FacebookShare to Pinterest
Labels: match preview
Newer Post Older Post Home