What a crazy match this turned out to be. Valencia struggled for 90 minutes to win this match against 9 men Malaga who from the 15th minute played with one man less and than from the 65th minute with two man less.

The first half was a disaster for Valencia, we had almost no ball control, no chance and no shot towards Malaga goal. In one word the team sucked and did not deserve to win.
Malaga had a clear chance from the second minute when Guaita saved Valencia goal, the ball reflected to another Malaga player, but Miguel blocked the shot.

Malaga was dominating on the filed and in the 10th minute after a blunder from Dealbert Rondon scored a goal.
Malaga kept pressuring and kept attacking as they were playing at home against some second division team.
Dealbert was just awful as he made 4 huge mistakes and frankly speaking after such a performance he should sit on the bench for the remainder of the season.

Anyways going back to the 16th minute Pablo released a pass that found Mata, but newly signed Demichelis fouled Mata and the referee awarded Valencia with a penalty and a bit harshly awarded Demichelis a red card.
Mata set up to shoot the penalty and scored with a low shot in the far right corner of the net. 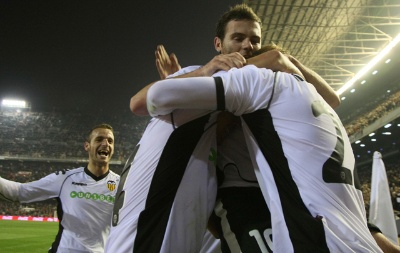 As soon as you think Valencia will be on the way to dominating the match from there on and playing good, just the opposite happened with Valencia pinched back and defending. This is the time that Dealbert made all those mistakes, though only 1 resulted in a goal, but the whole defensive line and cover was pretty disastrous. After a cross in Valencia's penalty area Aduriz, Maduro and Dealbert were outjumped, someone from Malaga headed the ball on the right side and found Rondon once again who easily scored totally unmarked by anyone. It was 2-1 for Malaga and a well deserved lead, because Valencia was not even playing football.

The first 45 minutes ended and change was necessary in order to restore some decency into the performance.

To Emery's credit he made the two perfect and logical choices and the ones I would pick to change the match around. He brought Soldado for the poor Dealbert and Banega for the ineffective and barely visible Jordi Alba.

Second half was different and Valencia immediately started strongly with possession and determination with Banega pulling the strings in midfield.The goal Valencia seek would come quickly in the 52nd minute from Soldado. The actions started with Banega as he made a long pass towards Pablo and this one made the assist to Soldado who scored a fine goal.

Just when it seemed there can be no more drama, Malaga defender Rosario was shown a red card for making some gesticulations to the line referee. The nervousness in the Malaga defense would be used by Valencia and Banega would score a goal to put Valencia ahead. After some chaos in the Malaga penalty area and bad judgement from Sergio Asenjo who failed to punch the ball out and the ball was traveling out of the penalty area and towards the oncoming Banega who placed a low shot in the low left corner of the net and scored a goal. 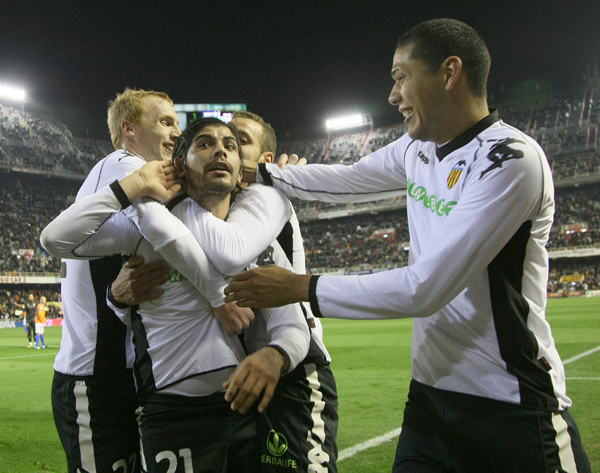 If this wasn't enough drama then Malaga would go on to score again and this time it was the collective mistake of Maduro who was out of position, Stankevicious and even Miguel who failed to get the ball out of Baptista's feet and he scored a brilliant trade-mark goal like the ones he used to score back in him prime days.

Valencia struggled to find the winning goal and just when all hope was lost, Malaga just couldn't fight anymore. The ball somehow luckally found Aduriz who after missing several opportunities managed to score a goal and put Valencia in the lead again with 4-3.

In the end a disapointing match for the Valencia fans as realistically Valencia really deserved to loose this match. The first half play was a tragedy and even though Valencia improved in the second, with a 9 man Malaga it would have been absolute even worse than tragedy not to win.

Player Ratings:
Guaita 7 - The only man in the team that actually performed good, he made two absolute great saves to save Valencia from loosing 4-1.
Miguel 4 - Not directly at fault for any of the goals, though should have probably covered Rondon for the second one and didn't really provide any support in attack.
Stankevicious 4 - At fault for the 3rd goal as he failed to tackle Baptista and allowed him a clear shot on Valencia's goal that resulted in a goal.
Dealbert 2 - Dreadful display as he made 4 huge defensive errors and always looked nervous and unsure.
Mathieu 5 - Maybe the best on the defenders and no threat came from his side, also offered some support going forward in the second half when Valencia took more initiative.
Pablo 7 - I'm going to put Pablo as man of the match once again. He was the only player that looked dangerous and offered a creative spark. He made the pass to Mata in the first half and after Mata was fouled the penalty was awarded. The also made the assist to Soldado for Valencia's second goal.
Maduro 4 - Failed in his defensive duties and partially at fault for the second recieved goal as he along with Aduriz and Dealbert were out jumped and failed to clear the ball out of Valencia's penalty area.
Tino Costa 3 - Absolutely dreadful performance in this match. He failed to provide any pass, lost the battle in the midfield and basically did not do anything for 45 minutes, until the second half when Banega came in and provided some stability in the midfield. Don't forget that Valencia were also playing with 1 man more from the 15th minute and Tino still lost the midfield battle.
Alba 2 - Barely visible. Apart from one run and one missed header I did not see him in this match.
Mata 6 - One of the few people that actually was useful. He provided the penalty, scored the penalty and generally was useful and dangerous.
Aduriz 4 - Scored a goal, but missed 3 chances to make Valencia's job a whole lot easier. Barely even touched the ball, apart from 3 failed chances and one scored goal.
Subs:
Soldado 7 - Came in for the dreadful Dealbert and immediately provided a much needed attacking threat. Scored a quick goal after he came in and make the assist to Aduriz for the winning goal.
Banega 7 - Came in and Valencia got back control of the midfield. Started the action that lead to the second goal, scored the third goal and was always threatening when going forward and also instrumental for Valencia keeping possession.
Joaquin 5 - He failed to surpass Pablo and apart from few crosses didn't really add much to Valencia attack.
Posted by SlickR at 12:55 AM
Email ThisBlogThis!Share to TwitterShare to FacebookShare to Pinterest
Labels: match report, results
Newer Post Older Post Home