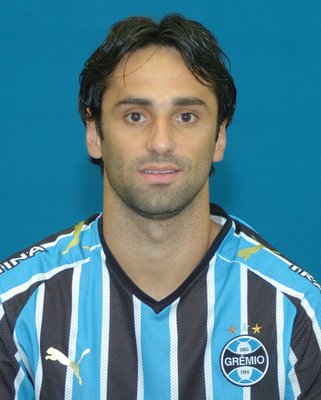 While its still not official, the transfer can only fail if the player has failed his medical exam, so its a pretty done deal.

Brazilian striker Jonas Gonçalves Oliveira has signed for Valencia CF from Gremio for a fee of 1.2 million euros. Jonas signed a contract with Valencia that will have him stay in Valencia 4 and a half years, starting from this January. It seems that Valencia used the players low release clause of 1.2 million euros to snatch the player from Gremio and has also offered him a better salary of around 1.000.000 euros.

The player considered this his big chance and happily accepted the offer from Valencia CF.
If you ask me I'd say this is a very good deal at a bargain price for a good striker. If he settles well in Valencia and with the Spanish style of football he could become an important player for Valencia. Whatever the case at least now Valencia has 3 strikers and Valencia can play more often with the 4-4-2 formation as there would be no fears now of Aduriz or Soldado getting fatigued or injured.
Posted by SlickR at 3:31 AM
Email ThisBlogThis!Share to TwitterShare to FacebookShare to Pinterest
Labels: news, official transfers
Newer Post Older Post Home