Valencia has ended the mid season in 4th place in the Spanish premier league and is still in the Uefa Champions League ready to face German Schalke, with Copa Del Ray progress still up for grabs.

So who was the best summer signing for Valencia CF and how do we come to such a conclusion!? Do you look at the official statistics, personal ratings, overall skill, team work all of the above or a mix of some.

Well I'll be looking at the official statistics, my own ratings I give to the players and just generally assesing who did better with the amount of playing time he got.

The three runners for the award are: Roberto Soldado, Aritz Aduriz and Tino Costa.

Roberto Soldado has scored 5 goals and provided 2 assists in La Liga, but he has not played as much as Aduriz. He works hard and has good shooting ability and good speed as well as heading ability, but lacks pace and explosiveness, he isn't very agile and looses his cool way too much as we have witnessed in few matches.

Aritz Aduriz has score 6 goals and has provided 1 assist in La Liga and has played the most of any Valencia player. He is a very hard working player and his headers are superb, but his shooting abilities not so much and in fact he has missed quite a few opportunities due to bad shooting. Aduriz is also slow and while he has strength he lacks agility and technique.

Tino Costa started slowly only featuring after Banega was injured, but has come off strong in recent weeks. He has scored 2 goals, but has no assists and has 6 yellow cards so far. Tino Costa lacks the possession ability where he can spread and dictate the match, but he is good in defending and tracking the ball as well as linking up with the attackers when really offensive. He also has great shooting ability as seen vs Bursaspor, but he lacks in other areas such as dribbling, pace and long passing.

Judging by my own ratings Tino Costa comes first, than Aduriz and than Soldado, but it must be noted that Tino has a lot less playing time and he has been left frustrated and unable to do anything on several occasions. 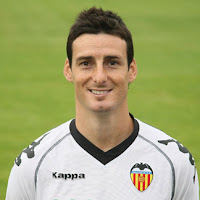 The best summer signing for Valencia is Aritz Aduriz.
- He came in for 5 millions if I'm not mistaken, 5 million less than Soldado and 1 million less than Tino Costa, but has had the most playing time, has scored the most goals and has been very hard working. He does not loose his cool easily and fights to the very end for the team. He has scored some crucial goals for Valencia and if he keeps up the good work, he may become an important Valencia player.
Right now he is the best summer signing for Valencia.

Cezar Sanchez has been a rock, no a mountain on Valencia's goal and if we look at it statistically he is the third best goalkeeper in Spain at the moment. Since Valencia has conceeded more goal than R. Madrid and Barcelona due to the poor defense he could easily be the best goalkeeper in Spain. He has single-handedly saved Valencia on numerous occasions and has been the most consistent player.

Jordi Alba hasn't played too much and one may say the matches he has played in have been easier, but that is just not the case. Every opportunity he has been given he has used it to the fullest and not being a natural left back he has slotted perfectly in that position with good defensive displays and great offensive displays.
He has also been more consistent than Mathieu and has often contributed more to the attack.

Joaquin Sanchez has been reinvented this year and this may well be his best season in a Valencia shirt since coming here from Betis. He has scored 2 goals, provided 2 assists and more often than not provided real threat on the right wing. Pablo may have taken this place if he hasn't been playing so badly for the last month, after a very good start. Joaquin has provided a lot of pace on the right wing and on his day he is the best player in Europe, if not the world. 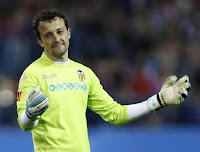 The best Valencia player overall is: Cezar Sanchez
-Cezar has been so influential since coming to Valencia that its hard to imagine the success Valencia has achieved without him. He has been responsible for so many good results Valencia has achieved that its really even amazing. Recently he has been struggling with injuries, but when fit he is just top class. He has also been influential on the younger players and has helped Valencia immensely.
Posted by SlickR at 1:58 AM
Email ThisBlogThis!Share to TwitterShare to FacebookShare to Pinterest
Labels: blog news, editorial
Newer Post Older Post Home