I could not watch the match fully because my streams were going down all the time, so I watch 2 minutes and than restart the stream another 2 minutes, than search for other stream and so on, so I can't write myself and will instead take the ESPN report and there won't be ranking for the players also.
From what I did watch Valencia defended 95% of the time and only had 3 chances for goal against Villareal. We did concede 3 goals, though luckily 2 were ruled offside and so we managed to hold onto a draw. 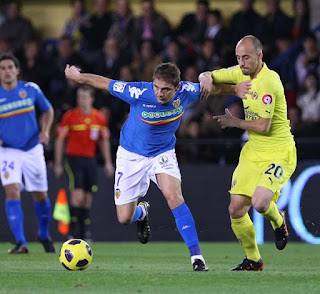 Villarreal fought back to win a point after going behind to regional rivals Valencia this evening, but saw their perfect home record in the Primera Division this season brought to an end by Unai Emery's defensive-minded side.

Aritz Aduriz gave Valencia the lead after 20 minutes, but Villarreal hit back in the second half and levelled through Giuseppe Rossi late on.

It looked as if Juan Carlos Garrido's side would then go on to claim all three points, especially after Valencia defender Marius Stankevicius was sent off with 10 minutes left, but the visitors defended in numbers and the derby ended in a stalemate which leaves both sides off the pace in the title race.
Villarreal began the day in third, six points adrift of leaders Real Madrid and three ahead of fourth-placed Valencia. 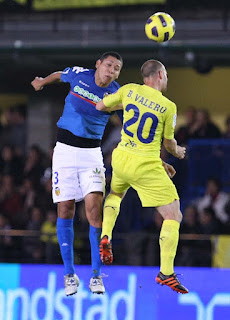 The Yellow Submarine lost 3-1 away to Barcelona last weekend, but came out of that match with a lot of credit following an impressive performance at the Nou Camp.
Valencia, meanwhile, had ended a four-match winless streak with a 2-0 victory at home to Getafe.
With Villarreal impressive in attack this season, especially at home, Emery opted for a five-man defensive line at El Madrigal.

And Valencia caused problems for the home side with their impressive counter-attacking play early on.
Aduriz, all alone up front, was heavily involved and gave the visitors the lead when his shot was deflected in off Gonzalo Rodriguez after 20 minutes.
Gonzalo, Cani and Joan Capdevila then all came close as the home side looked to hit back before the interval.

Pablo Hernandez blasted over as Valencia started brightly after the break, but Villarreal gradually began to take control and after Nilmar had come close with 20 minutes left, Rossi equalised.

The former Manchester United striker latched on to Bruno Soriano's cross from the left and gave keeper Miguel Angel Moya no chance with a close-range finish.

Valencia had been unable to hold on and their chances of sealing a point looked slimmer after Stankevicius received a second yellow card.

But Nilmar was unable to get on the end of Bruno's late cross and Villarreal failed to capitalise on their extra man.

Villarreal stay in third and Valencia remain in fourth for now, but Emery's side could be overtaken by Sevilla and Espanyol tomorrow.