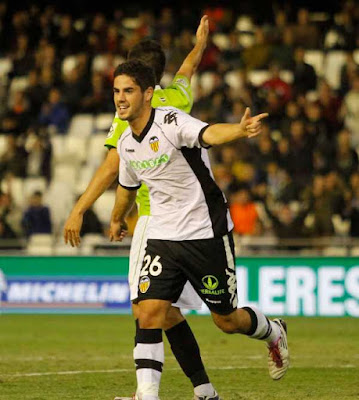 Valencia's second match against UD Logrones was pretty much decided from the previous game, as Valencia held a high 3-0 advantage.
Valencia coach Unai Emery decided to take small portion of the players and also included several youth players in the squad. Those young players were Isco, Paco, Ivan Rubio and of course Feghuoli and Guaita who are already in the first team.
The line-up for Valencia was this:
Guaita; Bruno, Stankevicious, Dealbert, Alba; Pablo, Maduro, Tino Costa, Vicente; Isco, Paco.

The match started in a surprising fashion, as Logrones managed a quick counter attack and scored a very early goal in the 2nd minute of the match.
After that it was all Valencia as there were creating chance after chance, shot after shot, until the 23rd minute when Isco scored a great goal, by pushing a Logrones defender, turning 180 degrees and firing past the goalkeeper.

Vicente scored a goal in the 33rd minute of the match, as the Logrones goalkeeper and defender miscommunication resulted in no one clearing the ball, allowing Vicente to just easily push the ball into the net.

Towards the end of the first half after a Valencia attack and large chaos in front of Logrones penalty box, the ball luckily came to Isco who dribbled past 4 defenders and managed to score his second goal. It was a Maradona style goal or Messi style goal with crazy dribbling going on and just great performance from Isco.

After half time Valencia continued to dominate the game, Emery made his substitutions, by bringing on Feghuoli for Pablo and later on Ivan Rubio for Isco.

The match was over, but Valencia were still attacking and Feghuoli got the ball in a counter attack, run from the center of the field to Logrones penalty box and fired a powerful, but precise shot and the ball went in, it was 4-1 for Valencia.

Player Ratings:
Guaita 5 - Did not have a great game, could not do much for the first goal, but had several shaky moments and bad reactions. Needs more experience and more confidence.
Bruno 6 - Defended what little Logrones managed, but failed to really help out in attack, although was always available for pass.
Stankevisious 5 - At fault for the first goal, lost his marking and with no communication between him and Dealbert they allowed a goal.
Dealbert 6 - Better than Stankevicious, made few tackles and positioned himself good, but not the best of nights for him.
Alba 6.5 - Constant menace from the left wing and combined well with Vicente.
Pablo 6 - Did not have the most productive of nights, accurate passing and full of running, but lacks vision.
Maduro 6 - Good night, although against Logrones he was attacking more than defending, since there was little attacking from Logrones.
Tino Costa 6.5 - Good passing, positioned himself in threatening attacking spots and combined well with the rest of the team.
Vicente 7.5 - Second best player of the night, had several shots on target denied, combined well with Alba, Isco and Tino and just overall great game from Vicente.
Paco 6 - One of the more invisible player on the field, he run well, had one shot on goal and generally passed well, but didn't have much influence on the game.
Isco 8.5 - Man of the match performance. He was dribbling, passing, shooting, combining with everyone and scored 2 goals, the second of which was amazing. Could have booked some more appearances in the first team.
Subs:
Feghuoli 7 - After a shaky few minutes after coming on, he found his feet and really showed his ability. Had few amazing passes to open him teammates, had great runs on the right and left wing and scored a beautiful goal.
Ivan Rubio N/A - Not enough time.
Posted by SlickR at 2:08 PM
Email ThisBlogThis!Share to TwitterShare to FacebookShare to Pinterest
Labels: match report, results
Newer Post Older Post Home