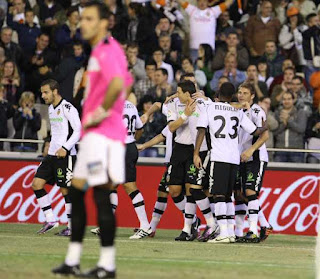 Valencia CF have finally achieved a victory in the Spanish league, after a series of poor results, especially at home. Tonight Valencia CF won against Getafe CF by two goals to zero and has climbed to 4th position on the table with 20 points, 3 points behind Villareal and with goal advantage over Sevilla.

The match started great for Valencia, as we had more possession and were immediately from the start pressing on Getafe. The first goal came very early after a great combination between Mata and Tino Costa, Mata returning the ball towards Tino, who took the ball with his chest and fired immediately when he had the opportunity and scored a goal. This play was probably play of the week in La Liga.

After that Valencia continued to dominate until Navarro made a huge mistake and allowed an opposing player to steal the ball from him and managed to create a chance, which thankfully Getafe somehow screwed it up.
From that moment on Valencia seemed to be scared and played more defensively.
There were few chances on both sides, but the first half ended 1-0 for Valencia, but the negative thing was that Mathieu got injured and was substituted.

The second half Getafe started as the attacker and Valencia were on the defense, with rare counter attacks to threaten Getafe's goal. In a rare attack Valencia got a free kick, Tino made the cross and Navarro found himself unmarked and headed the ball towards the goal, but got denied by Getafe's goalkeeper, only for the rebound to fall back short to Navarro and this time his shot went into the net.
Few minuted after that Mata got injured as well and was replaced by Vicente.
In the 72th minute Isco came in for Aduriz and seems like he brings a spark in the Valencia players, as all started playing all of a sudden and we had couple of chances to score more goals. First Isco had a great chance, but he hesitated to shoot at first and ultimately shot at the wall of Getafe defenders, than Soldado had a chance, where he back-passed the ball to move towards goal and than Joaquin had a chance that hit the post.
Ultimately the match ended 2-0 for Valencia.

Player ratings:
Moya 7 - Made some good saves to deny Getafe scoring a goal.
Miguel 6.5 - Great in defense, though rarely did he go forward.
Navarro 6 - Redeemed himself for a stupid mistake that could have cost us a goal, by scoring a goal just when it was needed.
R. Costa 6.5 - Good in defense and did not allow any danger on his side.
Mathieu 6.5 - Good until substituted, defended well and went forward to good extend.
Joaquin 6 - Had little support from Miguel so that affected him and lost way too many dribbles, though had two or three good runs and a great shot late in the match.
Albelda 7 - Very effective in his tackles and in his cover of the midfield. Stopped numerous Getafe attacks.
Tino 7.5 - Scored a beautiful goal after a great one-two with Mata and was generally useful in attack and defense.
Mata - 6.5 - Made the assist to Tino with a beautiful one-two play and seemed the liveliest member of the attack in the first half.
Soldado 6 - Played against his former team and did not allow that to affect him, was full of determination and had a few chances in the second half.
Aduriz 5.5 - Quite a bad match as he failed to do much of anything and didn't seem too involved with what was going around him.
Subs:
Jordi Alba 7 - Seems better and better every time he plays and this match was no exception. Added a great attacking threat on the left wing and performed his defensive duties admirably.
Vicente 7 - Presented a lot more direct threat than Mata and the Getafe defense had to put a lot of effort in stopping him, which opened up space for the other players.
Isco 7 - Came in and created a chance immediately, moments later he found himself in a scoring position and added great depth to our attack as everyone all of a sudden started playing better. He has a great future in front of him if he keeps up his performance.
Posted by SlickR at 12:27 AM
Email ThisBlogThis!Share to TwitterShare to FacebookShare to Pinterest
Labels: match report, results
Newer Post Older Post Home