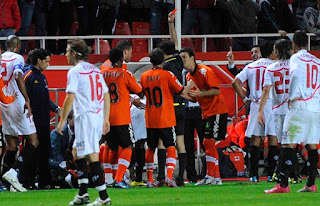 The match between Sevilla and Valencia was essentially decided by the referee, by giving out a non existent red card to Mehmet Topal.
Lets be clear, Valencia did not play very good even before the Topal send off, but they were getting better as time was passing and were starting to control the ball more. In fact Sevilla didn't have a chance on goal until the send off. Its impossible to say if we would have won or not, if we played with 11 players, but we certainly would not have been the defeated in the matter we were.
As if the red card wasn't enough, even luck decided to be against us, as Cezar Sanchez was injured few minuted before half time and substituted in the second half.
But even if that wasn't bad enough Unai Emery decided to play with one man down in the same formation and hoping for a miracle win that wasn't going to come.

The match started with Sevilla the better side, they had more control of the ball and were the attacking team, with Valencia threatening from counter attacks, but ultimately loosing the ball too easily to the Sevilla midfield and defense.
Just as we were starting to play better, Topal and Caceres bumped into each other for a 50-50 ball and Caceres acting skills helped make this an easy decision for the referee and give Topal the red card. This was not even a foul and if it was, it probably should have been awarded to us as Topal was previously fouled when he lost the ball and run to recover it, thus clashing with Caceres.
Anyways from there on it was all Sevilla as Valencia lost the midfield and lost the confidence to do anything. Even though Sevilla were attacking constantly they didn't have any clear chance on goal what so ever and were denied quite easily in the first half.
Valencia actually had the most solid chance earlier in the match as Mata received the ball after Cezar's goal-kick shot fly over all Sevilla players and Mata was quicker to respond and make a shot on Sevilla goal, but the goalkeeper denied him.

In the second half Cezar Sanchez was replaced by our young goalkeeper Guaita and his youth and inexperience will show when we receive the two goals.

The first goal for Sevilla came when Caceres made a 30 meters run without being marked by any Valencia player, he shot at goal, Guaita reflected the ball and Miguel as usual was slow to react, allowing Negredo to move swiftly and shooting, the ball getting through between Guaita's legs.
While it wasn't directly Guaita's fault and more Miguel's fault, he could have done better if he had more experience, I'm sure it would not have been a goal if Cezar was on goal.

After this early goal the winner was basically decided, there was almost no chance Valencia to come back with man down and will lead to Sevilla victory. Emery decided to gamble, as he did not reinforce the midfield and try to have more control of the ball, but he replaced Mathieu with Alba, a good move in a 11 vs 11 match, since Alba is essentially a left wing and more dangerous in attack, but would be confined to defense most of the match. 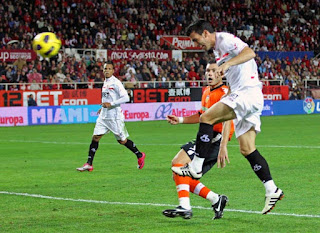 After some time Luis Fabiano would have had a lucky goal, when he just barely touched the ball, but went towards the goal, just barely hitting the bar and not going in the net.

For the second goal, Dabo would cross the ball into Valencia's penalty area and Alfaro unmarked by Navarro would easily head the ball in the net. Again not really Guaita's fault, but rather Navarro's fault, but I can't but think Cezar would have position himself better and punch the ball in the air and clear the danger.

Anyways it was basically two defensive mistakes that allowed Sevilla to score the goals and beat Valencia, so every good defensive clearance, tackle or whatever Navarro and Miguel did was neglected.

The match ended 2-0 in favor of Sevilla and this puts Valencia into a really difficult position going forward. Things are not going to easily get better and we need hard work, more consistence and better judgement by Unai Emery to start winning and get on winning terms again.

Player ratings:
Cezar 7 - Always a calming presence in defense and someone to rely upon when our defense fails.
Miguel 5 - Had a pretty good night all round, but one huge mistake and allowed Negredo to score a goal.
Navarro 5 - Same as Miguel, was quite good for most of the match, but one huge mistake and Sevilla scored the second goal.
R. Costa 6 - Can't fault him for anything, the defense didn't have enough cover from midfield as Topal was send off.
Mathieu 6 - Also can't fault him, he had hard time defending, but with Mata not helping out in defense its not a surprise.
Joaquin 6 - Dribbled and run forward well, but didn't have many option to combine with, defended admirably and stopped a Sevilla counter attack in a dangerous position.
Topal 5.5 - Did not have a terrific start to the game, but started to grow into the game, unfortunately wrongly dismissed in what wasn't even a foul.
Fernandes 5.5 - Terrible before the Topal dismissal, lost many balls, but surprisingly improved after that. Run a lot more, covered a lot more ground and generally made himself available for passing, still lost too much balls though.
Mata 4 - Tried to make something in the first half, but his inability to help out in defense in such a match weighs heavily.
Soldado 4.5 - Missed a sitter in the second half to get Valencia back into the game as he only managed to fire at the Sevilla keeper. Had a quite game overall.
Aduriz 4.5 - Mostly invisible, came further back to receive the ball and helped out somewhat in midfield, but he is not a player who can hold his own in the middle.
Subs:
Guaita 5.5 - Not a terrible performance by any means, but could have done a tiny bit more for both goals.
Alba 6 - Defended decently and had a good forward run that seemed convincing at the time, but ultimately couldn't do anything with it.
Pablo N/A - Not enough time.
Posted by SlickR at 1:58 PM
Email ThisBlogThis!Share to TwitterShare to FacebookShare to Pinterest
Labels: match report, results
Newer Post Older Post Home