Gers suffer first defeat Rangers suffered their first defeat in the Champions League this season as Roberto Soldado grabbed a double to hand Valencia a 3-0 victory at the Mestalla.
He netted on both sides of the interval, before Tino Costa sealed the win late on, as the Spaniards leapfrogged Rangers into second place in Group C, with Manchester United strengthening their grasp on top spot with a win over Bursaspor.

Steven Naismith hit the woodwork twice on a frustrating night for Walter Smith's men as they failed to produce the fightback to maintain their unbeaten run in the competition.
Rangers were boosted by the news that Maurice Edu - who netted for both teams as the last meeting between these clubs ended in a 1-1 draw a couple of weeks ago - was passed fit for the match.
The American was doubtful for the clash with a calf injury but was able to start, while fellow injury doubt Vladimir Weiss failed to make the squad.

The inclusion of Edu allowed boss Smith to name the same starting XI who claimed a point against Manchester United at Old Trafford in their opening game. 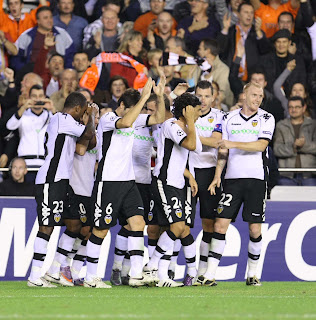 Juan Mata tried to test Allan McGregor in the opening couple of minutes as Valencia tried to make an early impression but his shot from distance was weak and comfortably dealt with by the Rangers goalkeeper.
The midfielder then had another go, this time collecting from David Albelda, before trying to chip past McGregor but he was able to tip just wide of his right-hand post.

But it was Rangers who could have taken the lead when Naismith embarked on a surging run down the left flank before cutting inside past Albelda and rifling a shot at goal that crashed off the post, with Edu's rebound falling harmlessly off target.

At the other end, Aritz Aduriz's cut-back found Mata in plenty of space six yards out and his rasping effort looked netbound until McGregor pulled off another impressive block to parry the shot wide.
It had been an open game so far and Valencia were threatening again when Aduriz threw himself in front of Mata's free-kick only to see his header flash inches past the post.
But McGregor was picking the ball out of the back of the net when the Spaniards surged into the lead after 33 minutes, finally sparking their fans into life.

Mata's corner was punched clear by the Rangers goalkeeper and, following a scramble in the box, the ball fell for Soldado who was able to fire home. Sasa Papac may have been able to block on the line but McGregor got just enough of a touch to take the ball past the full-back.

Valencia looked dangerous after the restart as they attempted to add to their lead and McGregor was called into action again to prevent Rangers from falling further behind.

Mata was the provider with a lovely cross for Aduriz who produced a firm header that would have found the back of the net had the Rangers goalkeeper not come to the rescue with yet another fine save.
The Scots could have hauled themselves back into the match when Naismith went on another surging run before picking out Kenny Miller this time. The striker shifted onto his left-foot and unleashed a shot that lacked purchase and was too easily dealt with by Cesar Sanchez.

Hopes of a Rangers comeback were dealt a blow when Soldado claimed his second of the night after 70 minutes to put Valencia firmly in the driving seat.
McGregor managed to get a touch but was unable to keep the striker's powerful, low right-footed shot from hitting the target.

Miller then went to ground in the box but there appeared to be little in the incident and German referee Felix Brych waved play on, before Naismith's header hit the post.
It was Valencia who found the back of the net again with a minute to go when substitute Costa rattled a ferocious shot in off the post, before nestling in the bottom corner.
The only good news on a disappointing night for Rangers was Manchester United's win over Bursaspor, leaving the Turks rooted to the bottom of the group without a single point and with Smith's men on course to at least claim third spot and a Europa League berth.

Player ratings:
Cezar 6 - Not his brightest performance, but when he plays the defense is a bit more stable.
Miguel 6 - Went forward and overall did well defensively, but had 2 big defensive lapses
Navarro 4 - Not an encouraging performance, poor decision making and very slow to react.
R. Costa 5.5 - The CB's are worrisome this season, not a poor performance, but a lot more is required.
Mathieu 7 - Constant forward arrays and really done well with his runs, not neglecting his defensive duties at the same time.
Joaquin 7 - Constantly troubled Rangers defense, made 3 amazing runs towards the end, but he lacked the decision making and made the wrong decision 3 times.
Albelda 7 - Great display from Albelda, put ashame some of his younger Rangers counterparts, even put some dangerous balls forward.
Banega 7- Not at his best, though coming close to it rapidly, had good visions and spread out the ball well.
Mata 9 - This is the kind of performance we've been missing from Mata. He was full of running, combining with other players, showing up all over Rangers back line and making Rangers frustrated with him.
Soldado 8 - Great performance from Soldado, scored 2 great goals and contributed a lot in attack.
Aduriz 7 - Did not score but had several tried with his head, ultimately denied every time, but helped out the time and positioned himself in good spots.
Subs:
Tino Costa 7 - Went in, continued what Banega was doing pretty well and also scored a goal.
Fernandes 5 - Had few long shot tries, that were was bad as it could get and ultimately didn't play good enough it the time given.
Pablo N/A - not enough time.
Posted by SlickR at 6:55 AM
Email ThisBlogThis!Share to TwitterShare to FacebookShare to Pinterest
Labels: champions league, match report, results
Newer Post Older Post Home