Mata new contract will have him stay in Valencia untill 2015 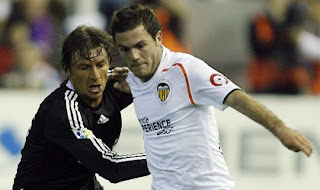 Mata contract saga is set to end in a few days, most likely the day after the match with Sevilla. Mata is currently one of the least payed Valencia players and his agent, who is also his father Mata senior, has been in talks with Valencia's president Manuel Llorente for more than a month now over an improved contract.

The news started that Mata wanted an improved contract, but president Llorente was opposed to it, as there would be no financial or sporting reasons for such a thing, though he knew Mata's salary needed improvement so he suggested a new contract that would see Mata also increase his stay and the release fee also increased.

Now the contract is done and there are just few tiny bit that need to be sorted out, the new and improved contract would have Mata stay in Valencia until year 2015 and the reported salary is around 3 million euros.

This is surely to motivate Mata for the next match Valencia play against Sevilla.
Posted by SlickR at 4:45 PM
Email ThisBlogThis!Share to TwitterShare to FacebookShare to Pinterest
Labels: news
Newer Post Older Post Home