Chori Dominguez to leave in January? 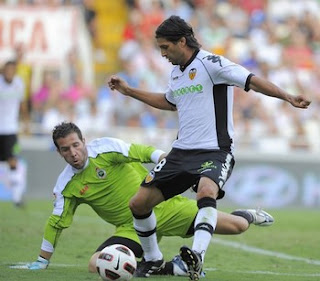 Chori Dominguez is reportedly the target of 3 teams, that would like to purchase the striker in the January transfer window. Chori hasn't really fit in the Valencia squad, last season he sat most of his matches on the bench and when given a chance as a sub, didn't really grab it.
This season Valencia coach Unai Emery has given his more chance to prove himself, but so far there's been so-so performances and seems like he is slowly falling out with the coach.
The reported teams are Greek Panathinaikos, Chori's previous club Rubin Kazan and the third team is reportedly from Spain.
Chori Transfer price is around 1.5 million euros currently, though if he improves it may go up a bit.

Chori's agent will meet with Valencia's sporting director and coach to talk about the players future. If this is true, and I think it is, then the report about Hugo Almeida makes sense.
With Chori Dominguez sold, we would take a decent 1.5 million euros and open up space for the signing of Hugo Almeida.
Posted by SlickR at 4:34 PM
Email ThisBlogThis!Share to TwitterShare to FacebookShare to Pinterest
Labels: transfer speculations
Newer Post Older Post Home