Valencia is going to meet Atletico Bilbao at the Mestalla and will be hoping to bounce back after a demoralizing loss to a weka Manchester United side.
Valencia dominated possession and play for most of the game and committed to full attack without thinking about the consequences. United’s young Mexican striker Javier Hernández found the only goal, with Sir Alex Ferguson’s side securing a robbed win.
Valencia currently lies top of the La Liga table with 13 points after five games; a point ahead of Barcelona and Villarreal. A win now and they will continue to lead the table and it will be a nice morale and confidence boost.

Even though Valencia lost they at least played good football, but I was not impressed with few of the players namely Tino Costa, Mata and Chori. They were the players one would expect to take the initiative and step up in order to bring Valencia the victory, but they all failed to do so. Mata was too scared to do anything and returned every ball back to the defense, Tino Costa was virtual spectator for the whole time he was in and Chori really didn't do much of anything, apart from passing few balls. 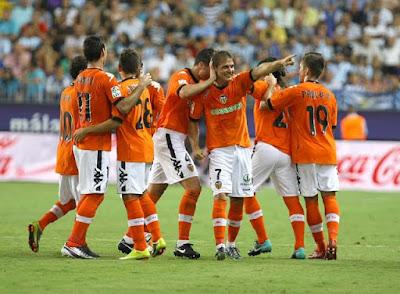 That said Joaquin looks more and more as a leader on the pitch and one of our best players so far, and having said that, hopefully he doesn't go to his old bad ways just to counter what I say.
It also shows how good Banega really is and how important he can be for us with his ability to control the game and spread the ball. His assists and vision are a great plus and he has recovered and is training with the squad as normal, though he probably would not be risked in this match.
Going back to Joaquin he still hasn't recovered and will miss out this match. Sofiane Feghuoli will be taken in the squad as cover and will probably start from the bench.

Atletico Bilbao are coming off of from a loss to Barcelona at home and apart from home their away record is quite poor, but they are a quality side, a very physical one and are always dangerous. Lets hope that their poor away history continues and Valencia goes on to win the game.
The biggest names and the biggest threats are going to come from their striker Fernando Llorente and midfielder Javi Martinez. If they are neutralized than Valencia is going to have a calmer game.

This game will finally be broadcasted on a channel and I can watch it in full quality and not a crappy internet stream.