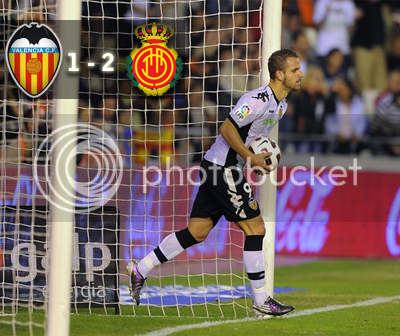 Okay so my formation, line-up and score prediction went completely in the water. Coach Unai Emery started with a 4-2-3-1 formation, fielded different players to what I expected and lost in what was the poorest games Valencia has played this season.
Unai Emery admitted his mistake after the match saying he is completely responsible for the loss, because he made some big changed in the selection and I will add that he also made an error in judgement for the formation and tactics.
He played a high defensive line again and had Albelda play quite above the defense, so this created a huge hole between the two central defenders that was exposed for the second goal. He also made a big mistake of starting Stanklvisious, instead of gradually introducing him to the team with late substitutions.

Anyways the game started in a similar fashion as other game, Valencia having most of the ball and doing absolutely nothing with it, until Mallorca manages to steal it and mount a counter attack.
Mallorca had several chances early on that spelled problems right from the start, I knew we were going to receive goals with such a shaky defense and was only a matter of time.
The first goal for Mallorca came through a non existent penalty though, but R. Costa allowed Pierre Webo to get away from him. This one actually managed to trip himself and the referee as if he was blind showed to the penalty spot. Gonzalo Castro converted the goal and it was 1-0 for Mallorca.


Valencia than had few smaller chances if I can call them that, but nothing really dangerous that's going to inspire confidence that we can break Mallorca's defense. After those few mini chances it was Mallorcas turn once again, this time it was Maduro and Stankevisious who felt asleep in front of the ball and allowed Diego Castro to score his second of the match.

Play forward several minutes later and Vicente was fouled in Mallorca penalty area and I think the referee having realized his mistake from the previous penalty couldn't wait to reward a penalty for Valencia. Soldado took the spot and converted the penalty.
The match ended 2-1 for Mallorca in the first half with Mallorca the better side, although Valencia had most of the possession.

Second half started and Unai Emery brought in Bruno for Stankevicious and Aduriz for Ever Banega to try to solidify the defense and strengthen our attack. These changes had a mild effect, the defense was somewhat better and the attack slightly more dangerous, but ultimately we were still seeing much possession and no chances, shots, something at that point.
Valencia kept on pushing and pushing and pushing, but could not create anything in front of Mallorca's goal and most of the ball were lost, allowing Mallorca to frequently threaten in counter attacks.
The match ended 2-1 for Mallorca in what has been the poorest game by Valencia of the whole season.

Player ratings:
Moya 6- Could not be faulted for the goals, made a good save before the second goal and looked rather confident with any smaller threats he had coming.
Marius 4- Couldn't have hoped for a worse start, out of position and poor marking for his first match.
Maduro 4- Asleep for the second goal, made numerous mistakes and really out of form.
R. Costa 5- Somewhat better than Maduro, but poor performance still, often lost Mallorca players and allowed them space to create chances.
Jordi Alba 7- The was the second best player on the night, solid in defense and a thorn for Mallorca in attack together with Vicente. Was full of energy tonight and another great performance for him.
Pablo 4- Bad night for Pablo, while he has been brimming with energy and doing great in previous matches, I think he was just too tired for this match, having played several matches in a row now.
Albelda 4- Maybe a victim of emery tactics, he covered the defense from above, instead of serving as a fifth member and there was too much room, he is the most experience player though and should have done more.
Fernandes 5- Lost way too many balls, his passes were slow and often inaccurate and didn't help out in defense.
Vicente 7- The best player on the field for Valencia no doubt about that, he managed to earn a penalty and his runs were often dangerous.
Ever Banega 4- Not his best night, he was almost invisible and when he poped up, he usually either lost the ball or made a ridiculous inaccurate pass.
Soldado 5.5- He did not recieve much service at all, had to often come high to receive the ball.
Subs:
Aduriz 5.5- Little to no service and couldn't really do anything.
Bruno 6- Offered a little more calmness in the defense and was more available in the middle and attack and offered some support for the rest of the attacking players.
Tino Costa 6- Came in late and while he did brought a spark and a flux of energy with him, it was too little too late.
Posted by SlickR at 2:22 PM
Email ThisBlogThis!Share to TwitterShare to FacebookShare to Pinterest
Labels: match report, results
Newer Post Older Post Home