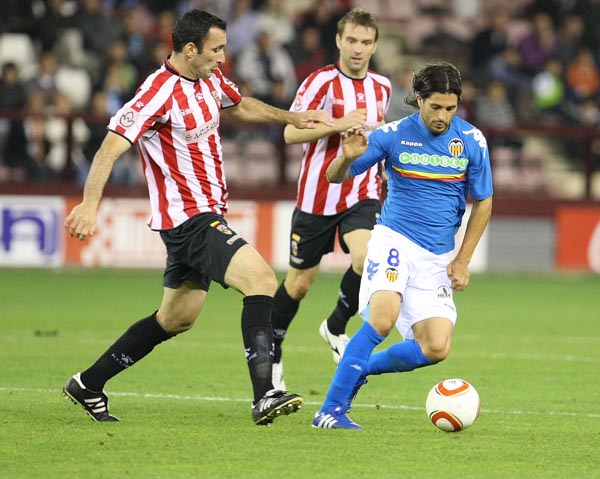 Valencia played a good game against Logrones and ultimately cruised to a comftorable victory. As expected Unai Emery fielded all out of form, recently injured and with little playing minutes players in the hopes that they can regain their form and be ready for tougher matches.
As expected Valencia started with control of the ball, though maybe unexpected had only a slight possession advantage. Chori and Joaquin were particularity active right from the start side and linked up well, Miguel who returned from injury was playing really well and helped out Joaquin in attack.
With most of the initiative and forward runs the players were making it looked like the final ball was missing, much like in all the previous 4 matches.
There were few chances here and there, but nothing of real importance and the first half ended 0-0. 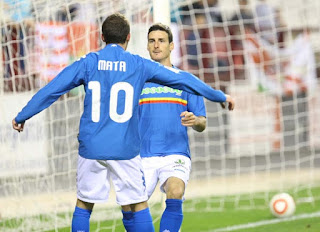 The second half continued much like the first ended, with Valencia threatening more, but ultimately falling short of any scoring chances. Then in the 51st minute Maduro was substituted and Stankevisious came on, hopefully its not an injury and only a precautionary measure.
Anyways Logrones were attacking in Valencia's box, but the ball was cleared and after a quick counter attack the ball ended outside, but Jordi Alba quickly threw the ball back in, that found its way to Mata who passed the ball to the oncoming Aduriz and he found the goal, it was 1-0 for Valencia. 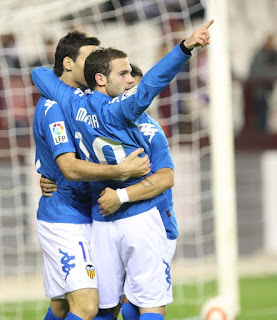 Just Minuted after Aduriz found itself in a similar situation to Mata previosly, passed the ball to Mata(as if to return the favor) and Mata scored, but the linesman flag was up for offside. Mearly minutes later Mata found itself in a similar position as when he made the assist and this time passed again in a similar fashion, again to the oncoming Aduriz and it was 2-0.
Quick two goals started and converted in a very similar fashion and you can basically see the motivation this gave the Valencia players.
After some calm period there was another chance for Valencia, this time Joaquin got into the opposition box almost getting a goalkick in the process, but ultimately crossing the ball towards Ever Banega, the Logrones keeper punched the ball out of the 16 meters field, only to find its way to Vicente, who calmly took a shot and found the net, it was 3-0 for Valencia.

After the third goal, Valencia came down to second gear and slowed down the game as they now had a high and secure victory and didn't want to risk receiving some crazy goal in the last minutes of the match.

Player Ratings:
Moya 6 - Didn;t have anything to do at all, though calm and collected when dealing with crosses.
Miguel 6.5 - Had an easy evening as he wasn;t troubled at the back, helped out in attack, good come back for him.
Maduro 6 - Seemed slow to react at times and Logrones attackers didn't really test him.
Dealbert 7 - Very alert and effective, what little threat came from Logrones he dealt with it perfectly, admitedly Logrones are not Barca or Mallorca, he did a great job still and its a question why hasn't Unai Emery started him more.
Jordi Alba 6.5 - Good defensively, but only occasionally threatened and did well to support in attack.
Joaquin 6 - Some good runs of his right side, made the cross that ultimately lead to the third goal, but its clear he is still a bit rusty and not in full fitness.
Albelda 6.5 - Very active in the first half as Banega was unable to find his feet, helped out in attack and disrupted Logrones attacks.
Banega 6.5 - Slow start, he wasn't very active in the first half, but improved and grew in confidence in the second, made few great through passes.
Mata 7.5 - Really anonymous in the first half, but had three brilliant runs in the second, two resulted in assists for Aduriz and one resulted in scoring a goal, but it was decided that he was offside. Good stuff from Mata, but needs to be more active thought the whole game.
Chori 6 - Not very effective in front of goal, missed two good chances and his judgment on two other opportunities was questionable at best, but fought hard, run well and tried to draw the defense to him to open space to his team mates. Needs more practice though and hard work.
Aduriz 8 - Did not have much service in the first half and he was rarely visible, but as Valencia became more dangerous in the second half, he was at the right places at the right times to score two goals.
Subs:
Stankevicious 6 - Replaced Maduro in the 50th minute and played well, though was not really tested.
Soldado 6 - Replaced Aduriz and slotted right into the action, had one try and fought solidly.
Vicente 7 - Great game from Vicente with the limited time he had, made the most out of it and scored a great goal. Hopefully he can continue scoring and contributing and will get a contract extension.
Posted by SlickR at 11:00 PM
Email ThisBlogThis!Share to TwitterShare to FacebookShare to Pinterest
Labels: match report, results
Newer Post Older Post Home