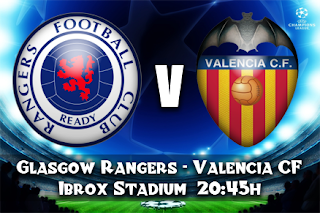 
The second day of the Uefa Champions League third matchday is upon us and brings many excitements. The most important match for us of course is between Rangers and Valencia.
Rangers may be sitting above Valencia on the table with one more point, but the positions can't be anymore different. Valencia is the clear favorite in this match, even though they are playing away from home. Walter Smith, Rangers manager is aware of the "size of the challenge" when they face Valencia, while Valencia coach Unai Emery is expecting strong performance from his side and a special atmosphere in Glasgow.

Rangers are coming in this match after a huge 4-1 win in the Scotish Premier League over Motherwell FC and a 1-0 win in their last Champions League game against Bursaspor, so they will be very confident ahead of this match.

Valencia on the other side are coming off from 2-1 loss to Barcelona in the Spanish League and their last Champions Leauge match which they played at home ended in a 1-0 loss to Manchester United. Valencia also lost their leader position in Spain due to the Barcelona loss, but they will still be confident and will look to bounce back and secure a convincing win tonight against Rangers.

Unai Emery has said in his interviews that Valencia only aim is to win and not draw. The team has been preparing well and its going to start the game furiously, looking for a fast goal that will ease up the pressure a little bit and allow them to play a more confident and calm game.
Even though Rangers are playing at home they will be mostly defending in this match, their possession so far has been only 40%, the lowest of all the teams in group C and this game is not going to be any different. Valencia will have most of the ball possession and initiative and will try to break rangers on the flanks, with frequent crosses and occasional through balls. Rangers defense has been the best so far in the entire competition, having received no goals at all. Its highly unlikely they will let many goals, so I expect a tight game in terms of goals, but potentially quite a lot of chances.

Valencia:
Maduro and Topal are the two returning players from injury for Valencia, while out with injuries will be Joaquin, Miguel and Sofiane Feghuoli. Marius Stankevicius does not have a permit to play in the Champions League for Valencia.

Rangers:
Lee McCulloch (groin) misses out, with James Beattie (thigh) and John Fleck (hamstring) also expected to be absent. Kirk Broadfoot missed the weekend match against Motherwell FC with a foot injury but could feature, having received a positive result from a scan on his injured ankle.

Result prediction:
Rangers FC 0-2 Valencia CF
Rangers have a solid defense for now, but they have only been up against the under performing Mancheter United so far and European and Turkey minnows Bursaspor so they haven't really been stressed defensively, they are also not very dangerous in attack with only 1 goal so far, Valencia on the other side have scored 4 goals and received only one and while coming off from a loss the confidence and motivation is still there.
I predict quite a tough and tight match, but ultimately Valencia will win by two goals.