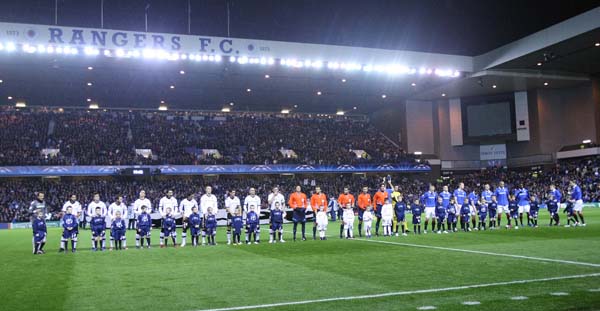 The match between Rangers and Valencia ended up being very exciting and thrilling encounter with both sides having many opportunities to win, with Rangers having the clearer cut chances. Fortunately for Valencia Rangers couldn’t convert their chances and their hero and top player of the match Maurice Edu was also the flop and tragic one as he scored both goals, one in Valencia’s net and one in his own net. The game ended 1-1 and both clubs will ruin their missed chances.
The match started as expected with Valencia in possession and dictating play, while Rangers were contempt to sit back, defend and try on the counter attack to score. The biggest battle though happened in the midfield though with Valencia unable to close down to Rangers penalty field and they were reduced to long crosses that were inaccurate and not dangerous at all.
Valencia had two dangerous early chances and looked like that was just the tip of the iceberg of what was to come, but after those chances faded away for all the possession and pretty play, Valencia were not creating anything dangerous to threaten the Rangers goal.
When Rangers came attacking the Valencia defense was extremely nervous and looked very shaky, it was clear from the first Rangers attack that we are going to have troubles coping with their attacks. Soon enough Rangers had a really great chance on goal after a bit of confusion and lack of positional sense from Valencia defenders. As if the attack gave Rangers a renewed confidence and motivation they really started pushing and were extremely dangerous on the attack with several chances. 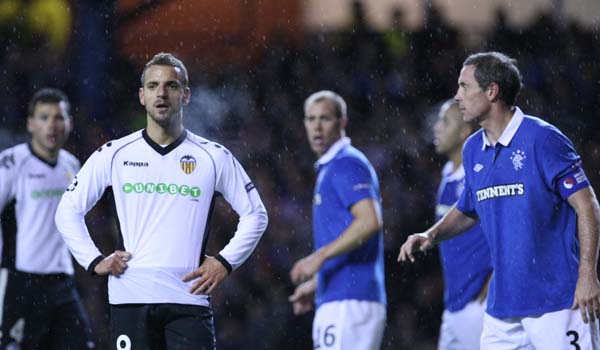 Their good attacking play will pay off, after a corner kick Valencia goalkeeper Cezar came out and tried to punch the ball away, but he was out jumped by Edu and Rangers were all of a sudden winning.
The goal brought urgency in the Valencia players and they really started pushing, with Pablo Hernandez really having a great day and being all over the field, passing, linking play, crossing, making himself available, tracking the ball back and forth, with Tino Costa following suit closely. Unfortunately Chori and Aduriz weren’t very active and really presented no option or a threat to Rangers goal.
The push lasted for 15 minutes with countless crosses and passes, but nothing decisive and the first 45 minutes ended with Rangers leading 1-0 against Valencia.
Second half started and in less than a minute Edu scores a second goal, though this time in his own net, previously he was a hero and now a tragic. 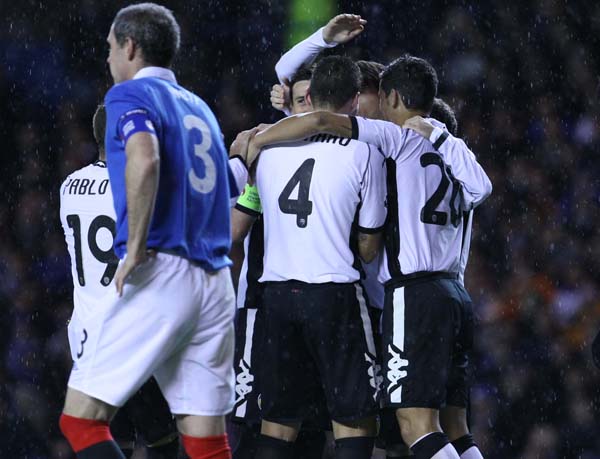 This goal would be welcomed by Valencia as it relieved so much pressure and put the game back on level playing terms. Valencia continued to dominate possession and play in the second half also, but apart from Pablo and occasionally Mata there was no player that could create danger towards Rangers goal, not even Soldado who was brought in in the second half for Chori Dominguez had a particularly good game.
Game continued on with Valencia having most possession, but Rangers actually being closer to scoring on several occasions, luckily Cezar was in top form and managed to save at least 3 sure goals.
Anyways there were several substitutions made as Fernandes came in for Tino Costa and Vicente came in for Mata, but nothing changed and while Vicente had few dangerous runs towards the very end it wasn’t to be.
Final result Rangers 1-1 Valencia and both teams take a point from this encounter, with Valencia now having no option but a win, when they take on Rangers at the Mestalla.
Technical details:
Rangers FC 1: McGregor, Weir, Papac, Edu, Davis, Miller, Foster, Naismith, Whittaker, Weiss (Lafferty, min. 87) и Bougherra.


Goals:
1-0 Edu (min. 33),
1-1 Edu (o.g.) (min. 46)
Referee: Nicola Rizzoli (Italy).
Yellow Cards:
Bougherra, Edu и Weir, (Ran),
Aduriz, (Val).
Stadium: Ibrox Stadium (40.000 viewers).
Player ratings:
Cezar 7- At fault for the first goal, may have been actually fouled by Edu, but should have done better, othervoise several saves to keep Valencia in the game.
Bruno 5- Went a lot forward, but didn't make anything out of it as he lacked the killer pass, and cought a lot of times out of position, struggled all match to cover his side.
Navarro 5- Really bad game for Navarro, caught out of position and beaten several times, would be lucky Valencia didn't receive more than one goal.
R. Costa 5- Same as his defensive partner, very bad game, made a huge error early in the game that may as well have cost us the game and had several other blunders thought the match.
Mathieu 5.5- Did decent going forward and didn't really have much support from Mata, but was not too good defensively, similar to our while defense.
Pablo 7.5- The best player for Valencia, run wild and all over the field, created the only chances for Valencia and always positioned in dangerous places, full of running and came back every time to help defend, if Valencia had one more player like him on the night it might have won the game.
Topal 6- Good is taking the ball from defense to offense and battled hard in the middle, but somewhat rusty in his defensive duties.
Tino Costa 6-  Good set pieces delivery and passed the ball well, but not very influential in attack where he should have been.
Mata 4- Failed to do anything, had only 3 bright moments in the whole game and that was it, he needs to be more direct when attacking and not just pass the ball like headless chicken.
Chori 4- Did absolutely nothing, he provided himself to receive the ball and had few dribbles but other than that he did nothing.Rightfully subbed at half time.
Aduriz 4.5- Same as the other attacking players(except Pablo) did nothing in this game, truth be told he had to come wide or out of the penalty to recieve the ball, but should have run into more dangerous positions.
Subs:
Soldado 5- Brought in some dynamism in attack and linked well with couple of players, but like the rest attacking players nothing to really threaten Rangers goal.
Fernandes 5.5- He was brought in for Tino to bring in more attacking play, but he failed to deliver. Too many times lost or gave the ball away.
Vicente NA- Not enough time
Posted by SlickR at 3:24 PM
Email ThisBlogThis!Share to TwitterShare to FacebookShare to Pinterest
Labels: champions league, match report
Newer Post Older Post Home