Pablo and Aduriz called to Spain squad for Euro 2012 qualifiers 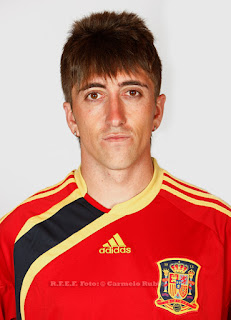 Well something had to give after my explosion why we only have 1 international. Torres and Pedro got injured in their last matches, that coupled with the injuries of Xavi, Fabregas and Jesus Navas has forced Vicente Del Bosque to make last minute additions and call Aduriz and Pablo to the Spanish squad for the Euro 2012 qualifications.

Del Bosque has added Villarreal CF midfielders Bruno Soriano and Borja Valero, who is uncapped, to his squad while Valencia CF's Pablo Hernández and Aritz Aduriz – another yet to make his senior debut – have also received calls. Spain began the defence of their UEFA European Football Championship crown with a 4-0 victory in Liechtenstein last month.

Vicente said in his press conference that Soldado is baked for international duty also and he will surely play in some of the future matches.

Maduro is supposed to be injured, but he was listed in the Holland squad, so maybe he recovered or maybe the Holland coach will make last minute change, we'll see.
Posted by SlickR at 4:20 PM
Email ThisBlogThis!Share to TwitterShare to FacebookShare to Pinterest
Labels: news
Newer Post Older Post Home